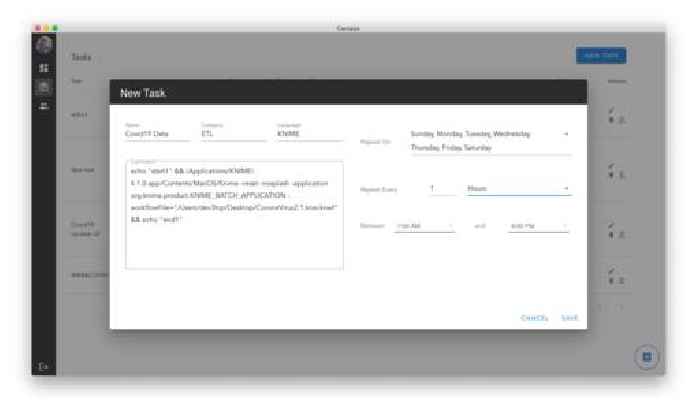 *Canopys Task Scheduler, Which Can Be Installed on Any Computer, Can Help Organize Even the Most Complex Task Orchestration or Simple Automation*

*AUSTIN, TX / ACCESSWIRE / May 12, 2021 /* Tyler Garrett, Founder of the tableau consulting services company Dev3lop, is pleased to announce the launch of their first desktop software named Canopys Task Scheduler. As Garrett mentioned, "I think this means we are a software company."

As Garrett noted, while he knows that there are other task scheduling softwares that are currently available, he and his team at Dev3lop wanted to create and launch a software that would allow anybody to automate and schedule their tasks.

"We have used many of the free alternatives and we think they are great in many ways, and they also inspired us to try to create something even greater," Garrett said, adding that the goal of the Canopys app is to improve the day-to-day operations of analysts, engineers, entrepreneurs, and anyone else who needs to automate kicking off a script.

Canopys Task Scheduler is also extremely user-friendly, and can be installed on any computer and operating system. Once it is ready to go, people can start scheduling tasks and automate more of their work. This, Garrett noted, will allow staff members to spend less time doing repetitive tasks.

Canopys is also built with modern needs in mind. Login and User management is left to platforms like Google and Microsoft, while Canopys instead focuses on being a best-in-class distributed task manager. In the current age of high profile hacks and information leaks, Canopys leans on third party authorization flows rather than requiring users to submit their own information.

To help train people on how to get all of the benefits they can from the Canopys app, Garrett said he and his team are currently working on creating a series of 4k videos.

"At Dev3lop, we aim to lower the barriers to solving problems to give everyone more time to do the things they love, and we are confident that Canopys will help achieve this."

Dev3lop.com is a grassroots tech startup based out of Austin, Texas. They offer tailored consulting solutions to their customers across an array of services, with a major focus on data analytics and tableau consulting service engagements. They have also just launched a new task scheduler software called Canopys. For more information, please visit https://dev3lop.com.