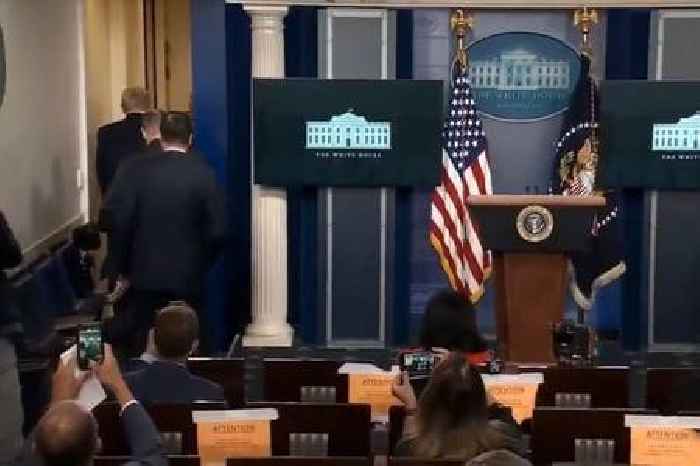 In an unusual chain of events, a White House press briefing on Monday was interrupted when Donald Trump was briefly evacuated from the room without explanation, then returned a few minutes later to continue the briefing after explaining there had been a shooting across the street from the White House.

The incident happened around 5:50 p.m. Eastern, as Trump was talking up the health of the stock market amid the otherwise broad economic downturn caused by the ongoing COVID-19 pandemic. As Trump suggested that there might soon be new record highs on the Dow Jones Industrial Average, he was interrupted by secret service agent just outside of camera range, who could be heard telling Trump about something “outside,” though it was hard to make out precisely what was said.

Multiple reporters in attendance at the briefing said they were then locked into the room; Trump returned just after 6:00 p.m. Eastern, and explained that “There was a shooting outside of the White House, seems to be very well under control.” Trump thanked the secret service for their “quick” and “effective” work, and further explained that a “suspect” had been shot and taken to a nearby hospital, and that no other people were shot.

The circumstances of the shooting are not yet known, though Trump told reporters that it occurred outside the White House, that “it seems the shooting was done by law enforcement,” and that the secret service would be providing more details as they become available.

See Trump’s sudden evacuation from the room below:

President Trump was rushed out of the White House briefing room Monday evening and later said the Secret Service had shot someone nearby. https://t.co/RrzvQqqQT4 pic.twitter.com/LdU94gVZZY

And see his remarks to reporters after returning to the room here:

.@realDonaldTrump describes the shooting that occurred outside the WH where Secret Service shot a "shooter" before taking them to the hospital. pic.twitter.com/OExxlN2PCo

Bill Maher Delivers a Fake Eulogy for Trump, and It's as Mean as You'd Expect (Video)

Social Security could be depleted by 2023 if Trump eliminates the payroll tax, chief actuary says

As expected, Kamala Harris has gotten the full treatment this week from Republicans and the extremist right-wing talking heads at..