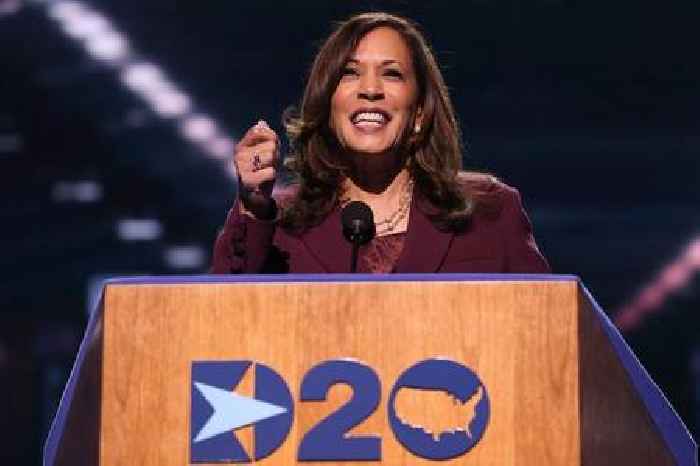 On night three of the 2020 Democratic National Convention, Kamala Harris formally accepted the nomination to be the party’s vice presidential candidate, and a slew of Democratic Party heavy hitters delivered pure red meat to party faithful. Amid it all, the event also shined a light on the problem of gun violence, and the effects of Trump’s immigration policies.

Read on for a break down of the most memorable moments from night three of the 2020 Democratic National Convention.

In a historic moment, Kamala Harris formally accepted the Democratic Party’s nomination for vice president and shared a wide-ranging speech that touched on her family story and her vision for an America under a Biden presidency.

“We’re at an inflection point. The constant chaos leaves us adrift. The incompetence makes us feel afraid. The callousness makes us feel alone. It’s a lot. And here’s the thing: We can do better and deserve so much more,” Harris said. “In this election, we have a chance to change the course of history. We’re all in this fight. You, me, and Joe — together.”

“Amidst the excitement and enthusiasm for this election, you’ve also heard about obstacles and misinformation and folks making it harder for you to cast a ballot,” Harris said. “So I think we need to ask ourselves, ‘Why don’t they want us to vote? Why is there so much effort to silence our voices?’ And the answer is because when we vote, things change. When we vote, things get better. When we vote, we address the need for all people to be treated with dignity and respect in our country.”

In a powerful speech, Barack Obama appeared to tear up as he urged citizens to not let “cynicism” about the government allow those in power to “take away your democracy.”

“This president and those in power – those who benefit from keeping things the way they are – they are counting on your cynicism. They know they can’t win you over with their policies. So they’re hoping to make it as hard as possible for you to vote, and to convince you that your vote doesn’t matter. That’s how they win. That’s how they get to keep making decisions that affect your life, and the lives of the people you love. That’s how the economy will keep getting skewed to the wealthy and well-connected, how our health systems will let more people fall through the cracks. That’s how a democracy withers, until it’s no democracy at all,” the former president said. “Do not let them take away your power. Do not let them take away your democracy.”

For about the first 15 minutes of Wednesday’s convention, viewers saw a tribute to the victims of gun violence and impassioned calls for gun reform in the country. Following testimonies of students who have experienced school shootings and a mother, DeAndra Dycus, whose son was left physically disabled by a stray bullet, former Congresswoman Gabrielle Giffords called for gun reform and urged listeners to exercise their right to vote.

“America needs all of us to speak out, even when you have to fight to find the words,” Giffords said. “We are at a crossroads. We can let the shooting continue, or we can act. We can protect our families, our future. We can vote. We can be on the right side of history.”

*The stories of undocumented immigrants and their families, front and center*

In an often gut wrenching part of the event, the convention spent several minutes highlighting the stories of two immigrant families negatively affected by Trump administration policies. One video focused on a military family torn apart by deportation, and the other on a mother who came her in order to find treatment for her daughter’s spinal bifida. Interspersed with the clips was several heartbreaking scenes from the prison camps established by ICE at US Borders. Watch below:

In a warning to Democratic voters, Hillary Clinton referenced the electoral college in her DNC remarks to remind voters they needed “overwhelming” numbers to ensure Trump wasn’t reelected.

“Don’t forget: Joe and Kamala can win by 3 million votes and still lose. Take it from me,” Clinton, who won the popular vote in 2016 but ultimately lost to Trump because of the electoral college, said. “We need numbers overwhelming so Trump can’t sneak or steal his way to victory.”

Speaking before a performance of her song “My Future” at Wednesday night’s convention, singer-songwriter Billie Eilish said President Trump was “destroying our country” and urged listeners to vote for Biden.

“You don’t need me to tell you things are a mess. Donald Trump is destroying our country and everything we care about. We need leaders who will solve problems like climate change and COVID, not deny them. Leaders who will fight against systemic racism and inequality, and that starts by voting for someone who understands how much is at stake, someone who’s building a team that’s sharing our values,” Eilish said.

The woman Desus and Mero dubbed “The War God” spoke mid way through the night, laying out specific policy proposals and laying into Donald Trump with the same directness and attention to policy detail she did during her unsuccessful Democratic primary campaign.

“Donald Trump’s ignorance and incompetence have always been a danger to our country,” Warren said in part. “COVID-19 was Trump’s biggest test. He failed miserably. Today, America has the most COVID deaths in the world and an economic collapse–and both crises are falling hardest on Black and Brown families… This crisis is bad–and didn’t have to be this way. This crisis is on Donald Trump and the Republicans who enable him. On November 3, we hold them all accountable.”

Barack Obama Urges Voters: 'Do Not Let Them Take Away Your Democracy'

Hillary Clinton Warns: 'Joe and Kamala Can Win by 3 Million Votes and Still Lose. Take It From Me.' (Video)

Billie Eilish: 'Donald Trump Is Destroying Our Country and Everything We Care About' (Video)

Kamala Harris Accepts Dem Nomination: ‘We Can Do Better and Deserve So Much More’ (Video)

Kamala Harris accepted the Democratic Party’s nomination for vice president with a far-ranging speech, covering everything from..