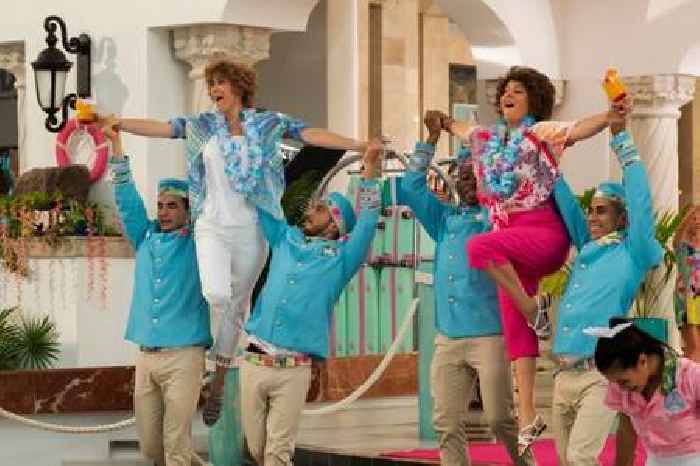 When I’m once again free to move about the cabin and see movies in theaters again, I hope I get the chance to give the hilarious *“Barb & Star Go to Vista Del Mar”* (Lionsgate) a second look with a rowdy and engaged audience. In the meantime, this new Blu-ray offers this comic gem for those who missed out during its streaming debut, along with plenty of extras, including deleted scenes, a fashion show, and a commentary track featuring director Josh Greenbaum and co-writers and co-stars Annie Mumolo and Kristen Wiig.

Also available: The provocative *“Test Pattern”* (Kino Lorber) mixes horror, social drama, and the zeitgeist, as a couple (she’s Black, he’s white) in search of a rape kit that hits one roadblock after another; frustrated filmmaker Gillian (played by writer-director Gillian Wallace Horvat) puts aside her documentary dreams in favor of committing the perfect murder in the dark satire *“I Blame Society”* (GDE/Kino Lorber).

*Also Read:* No, That's Not Morgan Freeman Voicing the Crab in 'Barb and Star Go to Vista Del Mar'

The title *“Preparations to Be Together for an Unknown Period of Time”* (Greenwich/Kino Lorber) suggests life during the pandemic, but this haunting love story — Hungary’s Oscar entry — follows a surgeon who leaves the United States and returns to Bucharest, where she plans to reunite with a physician she met and fell in love with during a medical conference. That he claims not to remember her when she shows up in Hungary is but the first twist in this riveting tale from director Lili Horvát.

*“Queer Japan”* (Altered Innocence) takes a fascinating look at the political, artistic, social and sexual subcultures in a country where LGBTQ+ topics still exist with a certain degree of taboo attached. Filmmaker Graham Kolbeins takes his camera to underground parties, pride parades and political rallies to display the vast array of experiences and backgrounds in the nation’s diverse queer community.

Also available: Miniseries *“Corleone: Mafia and Blood”* (Kino Lorber) outlines the 25-year manhunt that finally led to the arrest of kingpin Toto Riina in 1993; postwar Japan was exposed to American pop culture via U.S.-sponsored broadcasts, and *“Far Western”* (Corinth Films) looks at a generation of country music fans from that nation who have made pilgrimages to Nashville and brought the sound back home; filmmaker Stéphane Riethauser affectionately recalls his grandmother, who rebelled against gender expectations in the 1920s and passionately defended her grandson when he came out of the closet, in *“Madame”* (Altered Innocence).

William Friedkin is a hell of an interview, and great in a Q&A, so hearing him open up about one of his most famous films in *“Leap of Faith: William Friedkin on ‘The Exorcist'”* (Shudder/RLJE) is absolute catnip for film fans and horror buffs; *“Unmarked”* (First Run Features) follows attempts to locate and preserve African American burial grounds that are disappearing throughout the South; director Lance Oppenheim discovers that a seemingly ideal retirement village might be less than *“Some Kind of Heaven”* (Magnolia Home Entertainment); legendary roots-music doc *“Heartworn Highways”* and its new sequel *“Heartworn Highways Revisited”* (both Kino Lorber) both make their Blu-ray debuts.

*“Oliver Sacks: His Own Life”* (Zeitgeist/Kino Lorber) features exclusive interviews with the legendary neurologist conducted shortly before his passing, along with insights from well-known friends and colleagues; previously available only on VHS, *“Pet Shop Boys: Discovery: Live in Rio 1994”* (Rhino) makes its DVD debut, alongside two live CDs and a new booklet; *“Cooked: Survival by Zip Code”* (Bullfrog/Icarus) looks at what happens when climate change crosses paths with structural racism.

There was a time when filmmakers and producers were offended to have one of their films become the butt of the jokes of “Mystery Science Theater 3000,” but now it looks like distributors have come around to being in on the joke: Case in point: *“Hercules and the Captive Women”* (The Film Detective) makes its Blu-ray debut in a new 4K restoration, but the film comes packaged alongside the “MST3K” episode that skewered the 1961 sword-and-sandals epic, with a new introduction by “TV’s” Frank Coniff as well. There’s also a commentary track, documentary, and booklet dedicated to everything you ever wanted to know about this vintage adventure, starring Reg Park and Fay Spain.

Also available: When mysterious alien *“Doors”* (Epic Pictures) start appearing all around the planet, Josh Peck leads a team of scientists and volunteers determined to solve the mystery; Clancy Brown stars as an undertaker who knows where the bodies are buried, figuratively and literally, in his small town in *“The Mortuary Collection”* (Shudder/RLJE); import *“The Widow”* (Shout Studios) mixes a little “Blair Witch Project” and a little Russian folklore in its story of missing persons and a legendary dark spirit; Milla Jovovich and Tony Jaa star in *“Monster Hunter”* (Sony Pictures Home Entertainment), based on the popular video game.

Nico Mastorakis’ debut film *“Death Has Blue Eyes”* (Arrow) makes its Blu-ray debut with a new restoration and plenty of extras; weekenders head out to *“The Boonies”* (Indican Pictures), having learned apparently nothing from the whole cabin-in-the-woods subgenre; a trio of siblings hide from the police at what appears to be an abandoned farm, but they soon discover its sinister secret in *“Death Ranch”* (4Digital Media).

A woman falsely accused of witchcraft fights for her life and sanity in *“The Reckoning”* (Shudder/RLJE), from director Neil Marshall (“The Descent”); a neuroscientist’s battle with his inner demons threatens to become shockingly literal in *“Minor Premise”* (Utopia); Wes Craven made a rare on-screen appearance in Vincent Robert’s mid-90s cult fave *“The Fear”* (Vinegar Syndrome); you don’t need a 3D TV to watch *“Dynasty”* (Kino Lorber) with full stereoscopic effect — this Blu-ray of this newly-restored 1970s martial arts classic can be viewed with an enclosed pair of anaglyph (red/cyan) glasses, although if you do have the proper set-up, there’s that version as well.

If you’re hooked on documentaries about cults, don’t miss 1930s exploitation classic *“The Lash of the Penitentes”* (Something Weird/Kino Classics), about a group of masochistic Christians in New Mexico who were really into the scourging of the flesh; Nicolas Cage takes a night job at the wrong amusement park in *“Willy’s Wonderland”* (Screen Media); even in the very specific categories of “low-budget Italian ‘Jaws’ rip-offs,” Joe D’Amato’s *“Deep Blood”* (Severin Films) is revered as a bonkers masterpiece.

Mel Brooks no doubt finds it hilarious that the new 4K release of *“Spaceballs”* (Kino Lorber) means it will look and sound as good in the finest home theaters as the entire “Star Wars” series. As satires go, it’s not quite on the level of “Young Frankenstein” or “Blazing Saddles,” but try telling that to the generations of millennials and beyond who grew up loving the movie and having more familiarity with the object of its genre-spoofing than they do of his earlier work. All told, it’s a great month for Brooks fans, since there’s also a new Blu-ray of the sublime (and newly restored to 4K) *“The Producers”* (Kino Lorber).

Also available: Maggie Cheung’s incandescence as a movie star isn’t just a bonus in Olivier Assayas’ *“Irma Vep”* (The Criterion Collection), it’s practically the film’s subject; if you never knew that “Fast Times at Ridgemont High” spawned a semi-sequel (with a great Bananarama theme song), *“The Wild Life”* (Kino Lorber) makes its Blu-ray debut; Betty Hutton famously took over for Judy Garland as the lead in *“Annie Get Your Gun”* (Warner Archive Collection), but this new Blu-ray features a couple of the numbers Garland got on film (alongside a new 1080p HD master sourced from 4K scans of the original nitrate Technicolor negatives).

Lois Weber was one of silent cinema’s most prominent directors, and a new Blu-ray highlights 2K restorations of *“Sensation Seekers” / “A Chapter in Her Life”* (Kino Classics); come to *“Green Dolphin Street”* (Warner Archive Collection) for the love triangle — two sides of which are sisters played by Lana Turner and Donna Reed — and stay for the Oscar-winning tidal-wave and earthquake effects; *“History Is Made at Night”* (The Criterion Collection) as Jean Arthur and Charles Boyer fall madly in love, all the while eluding her abusive husband, in Frank Borzage’s classic.

Any discussion of Bill Murray’s achievements should include his work starring in and co-directing the underappreciated *“Quick Change”* (Warner Archive Collection), a hilarious crime comedy in which the heist goes off without a hitch, but leaving New York City presents one problem after another; the lives of four women become intertwined during Iran’s 1953 coup d’état in Shirin Neshat’s *“Women Without Men”* (IndiePix Films); one of the greatest spaghetti Westerns, Sergio Leone’s *“The Good, the Bad, and the Ugly”* (Kino Lorber Studio Classics) makes its 4K debut, as does Andrew Niccol’s visionary *“Gattaca”* (Sony Pictures Home Entertainment).

If “Parasite” has you wanting to go through Bong Joon Ho’s entire filmography, don’t miss this new 4K restoration of his serial-killer saga *“Memories of Murder”* (The Criterion Collection); Robby Benson memorably played sensitive teens throughout the 1970s (and much of the 1980s), but it could be argued that he did it best in 1973 Cannes winner *“Jeremy”* (Fun City Editions); this new edition of *“Donnie Darko”* (Arrow) features 4K UHD Blu-rays of both the theatrical and director’s cut, along with a 100-page hardcover companion book, among many bonus materials.

Before “Casablanca” and “White Christmas,” director Michael Curtiz made the legendary pre-Code horror classic *“Doctor X”* (Warner Archive Collection), starring Fay Wray (in one of her most notable non-“Kong” roles) and Lionel Atwill (in the title role); movies rarely come as cool or as insightful as Jean-Luc Godard’s *“Masculin féminin”* (The Criterion Collection), making its North American Blu-ray debut; a wife and mother, transplanted from Colombia to New York City and abandoned by her husband, refuses to be ground down by circumstance in *“Entre Nos”* (IndiePix Films).

I don’t know why every ridiculous Saturday morning cartoon of my childhood wasn’t eventually cast out into extraterrestrial adventures, but I’ve always had a soft spot for the universe-trotting silliness of *“Josie and the Pussycats in Outer Space”: The Complete Series* (Warner Archive Collection), which is finally getting an official Blu-ray release. I mean, it’s all there in the title. And I like to think if we’d ever gotten a sequel to “Spice World” (still crossing my fingers on that one), they too would go on interplanetary adventures.

Also available: One of TV’s great live-music venues, *“Austin City Limits”: Country* (Time Life) spotlights 164 performances from a staggering array of artists, from Loretta Lynn and Willie Nelson to Kacey Musgraves and Brad Paisley; the Irish comedy *“Finding Joy,” Season 2* (Acorn TV) returns with its protagonist experiencing the ups and downs of online notoriety; Carrie-Anne Moss plays a visiting FBI agent in Scandinavian noir *“Wisting,” Season 1* (Sundance Now); in *“Cold Call”* (Acorn TV), a woman is propelled by the death of her mother to seek revenge against those responsible.

Jamie Dornan: Kristen Wiig Apologized for Asking Me to Do the 'Imagine' Video

15 Actors Over 90 Still Making a Mark in Hollywood, From Mel Brooks to Betty White (Photos)