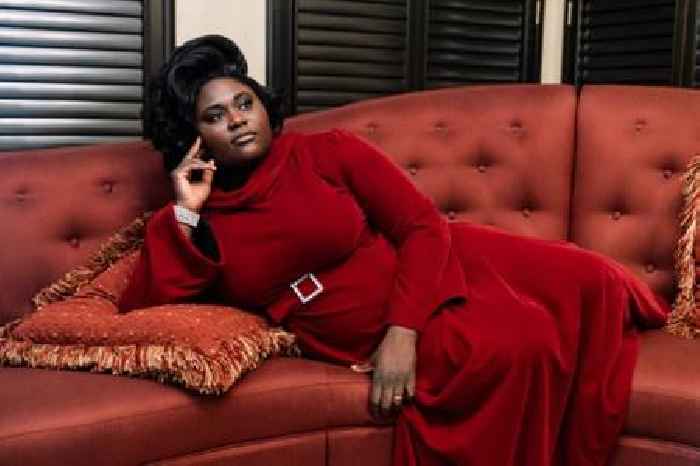 “Mahalia,” the Lifetime biopic produced by Robin Roberts and starring “Orange is the New Black’s” Danielle Brooks, tells the story of gospel and jazz singer Mahalia Jackson — but it doesn’t quite cover everything.

Throughout her life, Jackson went from a “fish and bread singer” — e.g., traveling the South singing gospel music for little pay to make ends meet — to performing in front of sold-out, racially integrated audiences at Carnegie Hall and at former President John F. Kennedy’s inaugural ball. Jackson’s first hit, “Move On Up a Little Higher,” her own rendition of a traditional spiritual, launched her to international stardom and became one of the best-selling gospel songs of all time, with over 2 million copies sold.

While Lifetime’s scripted film certainly covers a lot of ground — including Jackson’s health struggles, multiple romantic partners and passion for civil rights work — there are quite a few interesting facts about the late singer that didn’t make it to the screen. Read about some of the key omissions below, and see “Mahalia” when it airs on Saturday, April 3 at 8 p.m. ET on Lifetime.

*Also Read:* 11 Highest-Grossing Music Biopics, From Tupac's 'All Eyez on Me' to Elton John's 'Rocketman' (Photos)

*Raising Aretha Franklin*
“Mahalia” barely touches on Jackson’s relationship to other famous jazz, blues and gospel singers, including Aretha Franklin, who met Jackson when she was a child. Franklin’s mother died of a heart attack when she was just 10 years old, leaving her in the care of her father, traveling Baptist minister C.L. Franklin. C.L. enlisted several women to help raise Aretha while he was away on the lucrative church revival circuit, including Jackson, who lived near the family’s home in Detroit.

Aretha would later go on to credit Jackson as one of her biggest musical inspirations. She even sang her own rendition of one of Jackson’s most famous covers, “How I Got Over,” on her 1972 album “Amazing Grace.”

Jackson was close friends with King’s wife, Coretta Scott King, and the two often hosted each other in their homes; Jackson drove to Atlanta for Thanksgiving one year with the Kings, and they in turn frequently stayed with her in Chicago. Dr. King once said that Jackson’s house was one of the only places he felt he could “truly relax” while fighting for equal rights.

Jackson frequently sang for King at his rallies, including at bus boycotts in Montgomery, Ala., Southern Christian Leadership Conferences and the third anniversary of the Brown v. Board of Education decision. She even supported him at his “I Have a Dream” speech in Washington, D.C. in 1963 — before the speech, she performed “I Been ‘Buked and I Been Scorned.”

That bit is shown in the film — sitting behind King at the Washington Monument, Jackson yells to him, “Tell them about the dream, Martin,” right before he launches into the most famous part of his speech. King later wrote to Jackson, “When I got up to speak, I was already happy. I couldn’t help preaching. Millions of people all over this country have said it was my greatest hour. I do not know, but if it was, you, more than any single person helped to make it so.”

Jackson also became close with John F. Kennedy, who was a presidential candidate at the time King was arrested in Georgia. As King was set to be sentenced to four months of hard labor with mostly white prisoners (a death sentence, at the time), JFK intervened by calling Georgia Gov. Ernest Vandiver and persuading him to let King out of jail. Jackson became a fierce supporter of Kennedy after that and once said, “I feel that I’m a part of this man’s hopes. He lifts my spirit and makes me feel a part of the land I live in.” She later sang the “Star-Spangled Banner” at Kennedy’s inauguration ball in 1961.

*Also Read:* 'The United States vs Billie Holiday': Who Was the Real Harry Anslinger?

*Health troubles*
“Mahalia” shows some of Jackson’s health struggles — including a hysterectomy she received after touring London and Europe and performing at the Royal Albert Hall — but it doesn’t exactly detail what was wrong with her.

Jackson was diagnosed with sarcoidosis, an inflammatory disease that causes immune cells to form lumps in the body’s organs. Sarcoidosis isn’t curable but can be alleviated through surgery, which was why Jackson underwent so many operations.

After her hysterectomy, doctors cleared Jackson to tour again, but it took her a year to recover and she lost 50 pounds during that time. Afterward, she dealt with tachycardia, high blood pressure, hypertension and frequent fatigue as her condition worsened. Jackson continued to record and tour in Europe, Africa and the Caribbean despite her illnesses, but she had to cut one tour short in 1968 due to health concerns. By that time, she reported experiencing painful cramps in both her legs and hands, as well as inflammation in her eyes. Four years later, in 1972, Jackson died in recovery after a surgery to remove a bowel obstruction caused by sarcoidosis.

*Also Read:* How La Faye Baker Is Empowering the Next Generation of Black Stuntwomen in Hollywood (Video)

*Money troubles and arrests *
“Mahalia” notes that Jackson always requested to be paid up front in cash before her gigs — a practice Aretha Franklin later adopted — but never explains why.

Turns out, Jackson picked up the technique early in her traveling singing career after discovering that many segregated Southern banks wouldn’t cash a check made out to a Black woman. Instead, she demanded to be paid in cash and often carried tens of thousands of dollars in her suitcases and undergarments from show to show.

Her insistence on being paid up front aggravated some bookers and ended up getting her arrested twice — once in 1949, when she was released without penalty and ordered to pay $1,000 (roughly $10,000 in today’s cash) to the court, and another time in 1952, when she argued promoters weren’t paying her fairly according to her contracts.