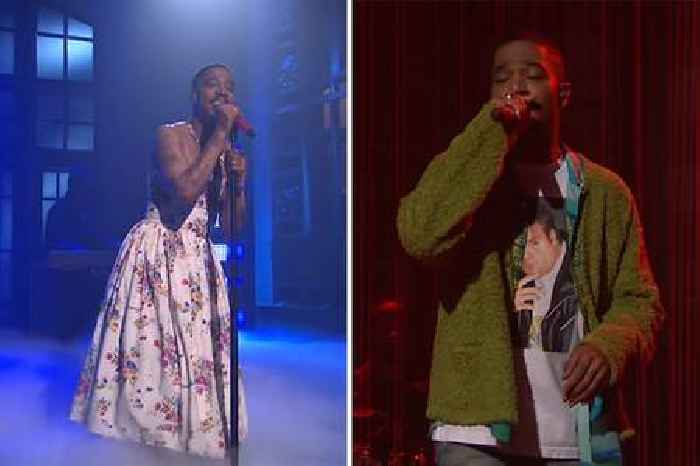 Kid Cudi had the internet abuzz with his fashion-forward performance as the musical guest on “Saturday Night Live” — with two looks that were an apparent tribute to the late grunge rocker Kurt Cobain.

First, the singer performed the song “Tequila Shots” wearing a T-shirt with a photo of the late “SNL” cast member Chris Farley, who died in 1997 at age 33 of a drug overdose.

Cudi also wore a green cardigan that recalled the one that Cobain — who died by suicide at age 27 in 1994 — had worn during his band Nirvana’s “MTV Unplugged” performance the year before.

Cudi returned later in the show with an even bolder callback to the late Cobain for his song “Sad People” — an ankle-length, spaghetti-strap floral dress reminiscent of a similar outfit that the Nirvana frontman wore during a photo shoot for the U.K. music magazine The Face.

If you’re out here hating on Kid Cudi because he was wearing a dress, grow up and understand that it’s not only an homage to Kurt Cobain but also him speaking loudly for everyone to be and love themselves for who they are. pic.twitter.com/H7i7NfYbM3

Both songs are from Cudi’s new album, “Man on the Moon III: The Chosen.”

Cudi has long been an admirer of Cobain — and according to Consequence of Sound even got a tattoo of the late rock star that he shared on social media last summer.

Many online commentators note the apt choice of outfit and its lyrical connections, since “Sad People” concerns Cudi’s longtime battle with depression, including a 2016 stint in a rehab for “suicidal urges”: “Lettin’ go, ooh, this ain’t livin’ / I swim in pain / Never drown, keep my head up above the waves (get it, get it).”

Others noted the timing of the performance, just days after the 27th anniversary of Cobain’s death.

Watch the performances below.

The Twitterverse heaped praise on Cudi for his performances, and for “breaking social norms” with his “fabulous” and “stunning” outfit in the “Sad People” performance — which he ended with a smile and a curtsy.

Sensing a pattern here with Kid Cudi on #SNL and another KC pic.twitter.com/quFEQOiiFW

Kid Cudi pulling the ultimate Kurt Cobain tribute on #SNL on the week of this death. @KidCudi all about love and suicide prevention and awareness!!! pic.twitter.com/m4DOUC5eFF

Man, I will always love Kid Cudi. The embodiment of his song “unf***wittable” #snl https://t.co/lLOuiF3Yde

Cudi’s curtsy was everything #snl @KidCudi

‘SNL': Bowen Yang Defends Sinking the Titanic – As the Iceberg That Sank the Titanic (Video)

Fans are once again calling for Bowen Yang to be made a “Saturday Night Live” series regular, after a sketch this week in which..