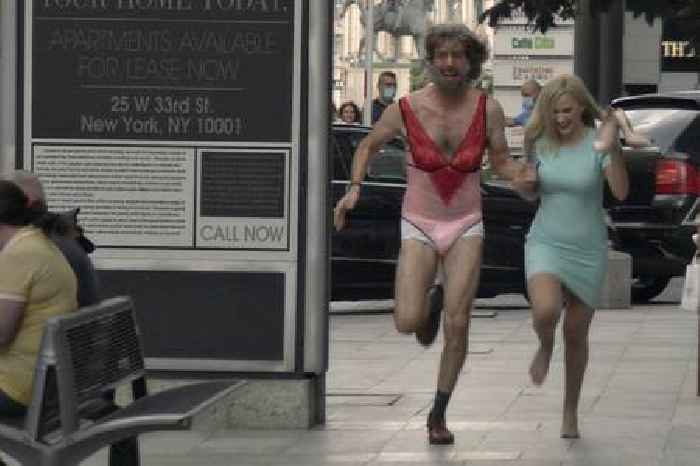 A version of this story about Maria Bakalova first appeared in the Down to the Wire issue of TheWrap’s awards magazine.

TheWrap has been talking to Maria Bakalova since early in this awards season, soon after she made her U.S. film debut in “Borat Subsequent Moviefilm.” At first, the attention for her in that film centered on her hotel-room encounter with Rudy Giuliani, in which he flirted with her “television reporter” character and then stuck his hand down his pants, either to tuck in his shirt (Rudy’s version) or for seamier reasons (everybody else’s assumption).

But the 24-year-old Bakalova, a recent drama-school graduate in Bulgaria whose film experience was limited to movies in that country, soon won raves for holding her own in the tense, improvisation-heavy world of Sacha Baron Cohen’s satiric comedy. As Tutar, the teenage daughter of Baron Cohen’s Borat Sagdiyev character, Bakalova was the unexpected heart of the film, and before long a Golden Globe and SAG Award nominee, a Critics Choice Award winner and now an Oscar nominee for Best Supporting Actress.

Bakalova first spoke to TheWrap on our panel for this year’s Bulgarian international Oscar entry, “The Father” (not the Anthony Hopkins/Olivia Colman one), in which she had a tiny role, but we had plenty of opportunities to talk to her about “Borat” as she spent much of the long awards season in Los Angeles. So it made sense to check in one more time after she became the first Bulgarian actor ever nominated for an Oscar. This time, she was in London to shoot the Judd Apatow comedy “The Bubble.”

*Also Read:* Maria Bakalova Wrote Lawyer's Number on Her Leg Before She Snuck Into the White House for 'Borat 2' (Video)

*Were you in London when the Oscar nominations came out?*
Yes, I was in London. I was on set and it was in the middle of a shot. And I got a little bit frustrated, thinking, “Why is the director coming closer? Why is he not saying his notes on the mic as usual?” I was thinking that this is going to be a problem that is that embarrassing, that he’s not even comfortable enough to say it in front of everybody else. And then he told me I was nominated.

*And you were the first name in the first category they announced.*
Yes, I saw that afterwards. And I was so happy when I heard Priyanka Chopra (Jonas) pronounce my name in the right way!

*When I heard her pronounce it Ba-kal-ova, I thought, “Oh no, I’ve been pronouncing it wrong all season. I’ve been saying Baka-lo-va.” But now I know.*
I don’t mind either way. The fact that people are saying my name, no matter in which way, is just a big win.

*I would imagine that a lot of people in Bulgaria went pretty crazy over your nomination.*
Everybody is excited and so many people are inspired. There is not a huge representation of Eastern Europeans in the Western cinema, so this one is a huge achievement for everybody, for every little girl out there in Eastern Europe. That’s the biggest gift.

*So what has been the craziest part of all of this for you?*
Probably the whole journey is crazy. Because in the beginning, I wasn’t even sure it was really happening. Is it a real audition? Is it a scam? And then shooting with all the real people that we met, including my fairy godmother, Jeanise Jones, my idol in my personal life. (Jones was hired to “babysit” Tutar.) Bringing people laughs but also showing them the important issues of life – it’s been crazy and beautiful. And with all the recognition for the movie, I have no words to describe how grateful and happy I am.

*When you were doing it, did you have a sense that you weren’t just making a silly comedy?*
I knew from the very beginning that we needed movie like this. We needed a project that is going to ask these questions and speak out against misogyny, because we’re living in 21st century. I’m glad that people not only enjoy the movie but feel the heart in the movie, because the movie is a simple story. It’s a story about a family. It’s a story about a father and a daughter. A father that is going to be the first one from this place to say that he loves his daughter, and a daughter that is going to say, “I’m not going to be subjugated by you. I don’t care about the crazy patriarchy that we are living in. I’m strong enough and I’m beautiful enough, and I’m not going to be given as a gift. I will be independent and have my own career.”

*How difficult was it to adjust to the style of acting that “Borat” required, where much of the time you’re improvising opposite real people who don’t know you’re playing a character?*
It was challenging because you never know how things are going to go. You have your perfect-case scenario in your mind, where people are going to say the things that you’re expecting them to say and do the things that you think they’re going to do. You have your goals for the scene for each scene, but of course people are unpredictable and they might take you to a completely different direction.

You have to trust the process trust, because it might be even better. This movie is happening in the real world, in a real social environment, with real people who just being themselves. And the beauty of the movie it that it’s revealing people’s true colors.

*So did Rudy say what you expected him to say and do what you expected to do?*
I don’t know. I think Sasha and the writers have better answers for that than me. I tried to go there without any expectations. I just did my best to learn as much as possible about him and about his biography, where he’s been, what he did for New York City. I’m supposed to be a fan, so what should I know to respect him? But I tried to not guess what he would do.

When I watch the scene now, it still kind of makes me nervous. After the effect that this movie and this scene brought to the world, I’m like, “Oh, my God, we actually did that.” I remember that he called the police and we were running away from the police, and we left the state, and the next day we even left the country. We went to Romania to film there. So it’s been quite extreme.

*Are there things you learned making this movie that that will help you when you go back to movies that require more traditional acting styles?*
For sure. I mean, just working next to Sasha Baron Cohen, it’s like a book of lectures. Even in the rehearsals, even when we’re not saying the lines, he’s speaking with his Borat voice and he’s walking the way Borat walks, to give this character the life he has on the screen. For me as an actor, it was an important lesson to keep the character alive, to believe that this person exists in the real world. It might look crazy, but it should exist.

*Also Read:* Maria Bakalova Wrote Lawyer's Number on Her Leg Before She Snuck Into the White House for 'Borat 2' (Video)

You’re extremely, right: This is one of the lessons that is extremely important, that no matter how big your dreams are, just dare to follow them there. You have to listen to your inner voice. If you’re responsible, if you’re working hard, if you love and if you believe, you’re going to get there, no matter if you’re a fictional character like Tutar or an actress from Eastern Europe dreaming to be in a big Hollywood movie, but told she will never be there.

Your dreams are valid no matter how grand – this is the story of my life. Maybe it’s similar to the story of Cinderella, but it’s my life right now.

Read more of the Down to the Wire issue here.

Two films starring Sacha Baron Cohen, “Borat Subsequent Moviefilm” and “The Trial of the Chicago 7,” were among the film..