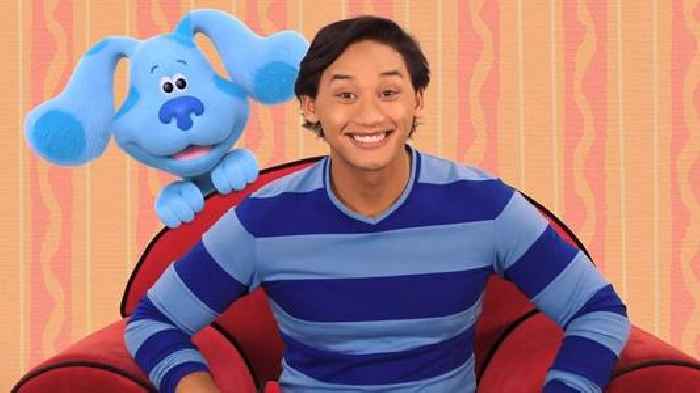 Singing and dancing with an animated dog isn’t a stretch for the 32-year-old actor, who studied theater and appeared in “Aladdin” on Broadway (as well as being a real-life dog dad).

But like many AAPI performers, Dela Cruz downplayed his Filipino heritage for years just to land roles.

*Also Read:*
‘Kung Fu’ Star Tzi Ma Explains Why This Asian Dad Is Unlike the Others You’ve Seen Him Play

“When I graduated college, all I wanted to be was ethnically ambiguous so that I could work,” Dela Cruz told TheWrap’s Lawrence Yee. “I would walk into auditions and say to myself, ‘Please don’t see me as Asian, please don’t see me as Asian.’ Because I knew that there were only like five shows that were for people like me on Broadway, and which were written by white men. And I knew that if it weren’t those shows, I don’t have a great chance.”

It wasn’t until he got involved in the Asian theater community that he began to change his thinking about himself and, more importantly, how he represented himself. After joining “Here Lies Love” — the story about former Philippines first lady Imelda Marcos — at the Public Theater and working with other Filipino actors did the actor have a breakthrough.

“[The Asian theater community] are actors that were not ashamed of who they were. And that’s when I realized, ‘Oh, I have been ignoring and suppressing who I am in order to fit into this world.’ That is the status quo,” Dela Cruz admitted. “As an actor, you’re supposed to be emotionally available. You’re supposed to be as honest as possible in the moment. And how could I be emotionally available and as honest as possible if I was telling myself, ‘Don’t see me as Asian, just be ethnically ambiguous?'”

“Then going into ‘Aladdin’ and being in a diverse cast that was unapologetically Black, Latin, and Asian and everything that I realized, ‘Josh, you look the way that you look You are Asian. You are Filipino American.’ That was a huge moment in my life because then things really began to unfold,” he added. “I realized the power in identity, and celebrating who you are, and what that is, and how that can unlock a greater power.”

The turning point came when he landed the lead in Nickelodeon’s 2018 “Blue’s Clues” revival. In the debut episode, “Meet Josh,” Dela Cruz is introduced as the cousin of former hosts Steve and Joe, played by white actors Steve Burns and Donovan Patton, respectively (Burns actively participated in finding a host among thousands of hopefuls).

*Also Read:*
‘Real Housewives of Dallas’ Star on Violence Against Asian Women: ‘There’s Already So Much We Have to Deal With’ (Video)

Dela Cruz credits both the change in his personal perspective and the colorblind casting process to landing this role.

“I never saw myself as a TV actor,” Dela Cruz recalled. “Even when I went into school, I was like, ‘I’m going to study theater, I’m going to be in musicals.’ Why? Because I knew about Lea Salonga. I knew about BD Wong, I knew about Lou Diamond Phillips. I didn’t see that on TV. I never saw things people that I identified with that weren’t a foreigner or a villain.”

“As I started to figure out who I am as an Asian actor, I started realizing that the box [media] created is screwed up. So why am I going to try to fit into that box? I should just be myself and pursue film and television, right?”

“The opportunity to become the host of ‘Blue’s Clues & You!’ was something that I never saw in a million years because it’s such an influential, huge show,” he added. “I used to watch the show with my little sister, I remember sitting on my aunt’s pink rug, watching every morning and playing along with her. It’s such a huge show that I never thought that I would ever be in this position. But then to do so as an Asian man is incredible. Because I didn’t see that on TV.”

The unfettered way his character was brought in, the introduction of his grandma or lola (veteran Filipina actress Carolyn Fe) and the support of the production (which recently wrapped a third season) have encouraged him further.

But Dela Cruz also recognizes that his audience — young kids — are lacking encouragement and going through unprecedented times with the coronavirus pandemic and movements in support of Black lives and against Asian hate.

“Racism is such a difficult conversation but such an important conversation to have. I think there was a study where kids at the age of 4 and 5 start to have biases. And then on the other side of that, they also feel discrimination for the way that they look,” he explained.

“As much as we would like to think that we are filtering that what our kids see there, it’s so easy to walk in on a conversation or seeing something on the news or a phone or on an iPad. That’s unavoidable. Somebody is going to be talking about it. And I think one of the best things that you can do is look at your own biases, look at your own actions, because there are a lot of things that we do and say that, at the surface seem harmless.”

Watch more of TheWrap’s interview with Dela Cruz in the video above.

Season 2 of “Blue’s Clues & You” is airing on Nick Jr. and streaming online.