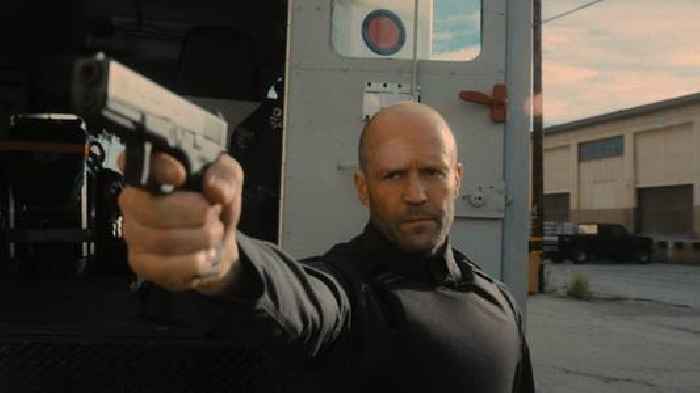 The action star’s latest collaboration with Guy Ritchie is violent fun with a slow-burn plot, but the movie has a woman problem

Whether you think Guy Ritchie is commenting upon overblown masculinity or merely indulging in it, his twist-laden crime sprees tend to be adrenaline-fueled fun, and in that regard, “Wrath of Man” is no exception. Ritchie’s reunion with leading man Jason Statham delivers the scheming, the shooting, and the swearing that the director’s fans have come to expect, by the bucketload.

But even at his most dude-fixated, Ritchie has always wisely included at least one sharp and savvy female character, the smartest cookie at the sausage fest. (Think Thandiwe Newton’s character in “RocknRolla,” or Michelle Dockery’s in “The Gentlemen.”) This time out, the women tend to be ornamental or victimized (or both), leaving one to wonder if the film wouldn’t have been better off as an unfiltered testosterone-fest if the filmmakers couldn’t manage to provide one interesting woman.

Ritchie and two other writers have adapted the 2004 French thriller “Le Convoyeur,” and this new version opens with one of the director’s trademark showy sequences, a one-take hold-up of an armored car by a group of crooks blocking the truck’s passage with a cement mixer. We see everything through one static camera in the back of the truck, with some of the more intense action taking place on the periphery, but don’t worry if you miss a detail: This robbery is the motor of the plot, and we’ll be seeing it a few more times from a few other angles.

A couple of months later, a man played by Statham — his co-workers call him “H” — applies for a job at that same armored-car company. He squeaks by with average scores as a driver and as a marksman, but on his first day on the job, he foils a robbery attempt (led by a thief played by musician Post Malone, billed here as “Austin Post”) by gunning down six or so would-be assailants with cool efficiency and deadly accuracy.

Meanwhile, we get to know a group of embittered veterans of the war in Afghanistan, dissatisfied with their lives back home and neglected by the government who sent them to fight; led by Jackson (Jeffrey Donovan), they decide to use their tactical know-how to go into the armed-robbery business. These men are disciplined and inclined to follow orders, even though it’s clear that Jan (Scott Eastwood) is a loose cannon and not necessarily to be trusted.

How these two separate storylines come to intersect, and why, provides “Wrath of Man” with much of its pleasure, as the film jumps back and forth in time, presenting that opening robbery and other incidents from various point of view, filling in the story gaps and explaining why H is working as an armored-car driver and what he eventually hopes to accomplish. All roads converge when the vets plan a major cash-grab on Black Friday, in a sequence that allows editor James Herbert (“Edge of Tomorrow”) to pivot seamlessly between Jackson’s elaborate planning of the heist and its ultimate execution.

This is director of photography Alan Stewart’s third collaboration with Ritchie, and he delivers the kinds of visuals that the director loves, from dank garages and warehouses where dastardly schemes are plotted to those whisky-hued masculine spaces that look like a Cigar Aficionado cover shoot waiting to happen. And both the script and the casting directors throw in enough blustery characters to provide various possible red herrings regarding the identity of veterans’ inside man at the armored-car company — could it be Eddie Marsan’s by-the-book company man? Josh Hartnett’s all-talk-little-action tough guy? Rob Delaney’s glad-handing exec?

Statham, meanwhile, does Statham, in the way that Cary Grant did Cary Grant, and it’s exactly what the material demands. The cast uniformly delivers, but if there’s a standout, it’s Eastwood, demonstrating that he might be better suited to playing twitchy scumbags than bland romantic leads.

If you watch Guy Ritchie movies for the taut crime sequences and the macho bluster, you’ll get what you came for out of “Wrath of Man,” but the tepid inclusion of women makes this a B+ effort compared to his sharper, smarter movies.

“Wrath of Man” opens in US theaters May 7.

'The Gentlemen' Film Review: Guy Ritchie Gets His Mojo Back in a Tale That Recalls His Early Breakthroughs

Jason Statham Apologizes for 'Offensive Comments' He Isn't Sure He Made