John Krasinski Is Colbert’s First Studio Guest Since 2020 and to Celebrate, They Arm Wrestled (Video) 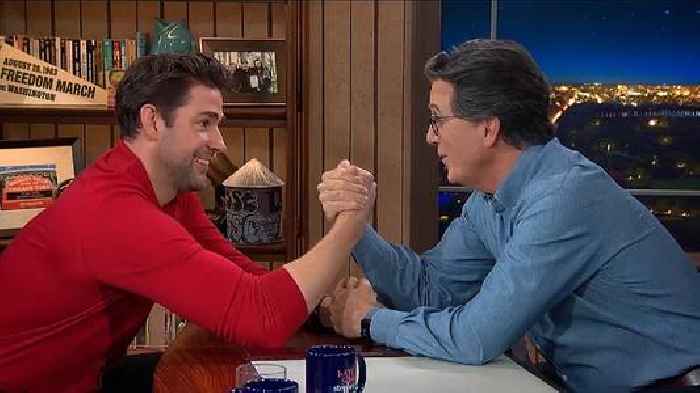 John Krasinski Is Colbert’s First Studio Guest Since 2020 and to Celebrate, They Arm Wrestled (Video)

Stephen Colbert celebrated a milestone on Thursday’s episode of “The Late Show,” welcoming his first in-studio guest since the COVID-19 pandemic shut everything down: “A Quiet Place Part 2” director John Krasinski.

To celebrate the big moment, Colbert challenged Krasinski to an arm wrestling contest and, unsurprisingly, got his ass kicked.

The bit began when Colbert asked Krasinski, “How strong are you?” We assume the answer is “very,” since Krasinski is also the star of Amazon Prime’s “Jack Ryan” TV series, which requires him to credibly do action hero things on the regular.

That’s probably why Colbert’s wife, Evelyn, who has frequently appeared on the COVID-era socially distanced version of “The Late Show,” wisely advised against this. “This is not smart, hon,” she said, though she was also chuckling pretty hard at the whole thing.

Krasinski told Colbert it was the first time he’d arm wrestled “probably ever,” something Colbert didn’t believe. Kransinski then confessed that as a kid, when he saw the Sylvester Stallone movie “Over the Top,” he certainly arm wrestled “for about two weeks.” Colbert joked that the film was “‘The Queen’s Gambit’ of arm wrestling.”

Colbert definitely knew he was going to lose because when he told Krasinski about the time he arm wrestled Daniel Craig, he said, “Have you ever arm wrestled a back hoe?” by which he clearly meant the “James Bond” star is extremely strong.

But after the bantering, the actual arm wrestling began. How did Colbert do? “Gah! I didn’t know we were really doing it,” he groaned as Krasinski pretty effortlessly pinned him.

The whole thing is very funny, though we’re really just stoked by yet another sign things might be returning to something resembling normal. You can watch the whole match below:

TONIGHT! How strong is @johnkrasinski? @stephenathome finds out IN REAL LIFE tonight on A Late Show! #LSSC pic.twitter.com/714BRS81NQ

“The Late Show With Stephen Colbert” will return to the The Ed Sullivan Theater on June 14 with a full, vaccinated audience,..

The Late Show with Stephen Colbert just welcomed their first in-person guest in 14 months and it was John Krasinski! The..