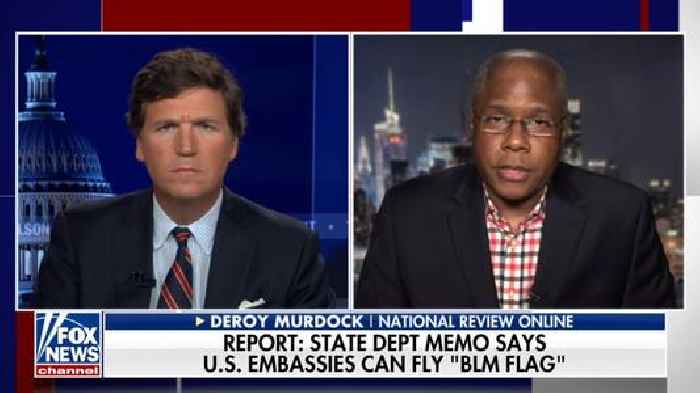 Tucker was incensed because of reports of a leaked memo apparently from the U.S. State Department expressing “guidance on Black Lives Matter language, banners and flags.”

The report also apparently told members of the State Department to “make full use of…. tools and resources to promote policy objectives to advance racial equity and support for underserved communities throughout the year,” with specific attention paid to the months of late May and early June.

Tucker continued, “what the State Department doesn’t appear to understand — or maybe this is the whole point — is that the existence of BLM is a national humiliation to the United States. The rest of world is watching; of course, we’re America.”

Incidentally, that claim about the nuclear family is a bad faith interpretation of a BLM position taken out of context. The organization does not, in fact, believe in abolishing families and instead advocates for policies that make it easier for families to exist.

Tucker then threw to a clip where a Chinese government spokesperson, engaging in the ad hominem debate tactic known as “whataboutism,” mentioned that there are many human rights issues in the U.S., and she adds that these issues are often “deep-seeded” and “they did not just emerge over the past four years, such as Black Lives Matter.”

Tucker interpreted this as: “BLM is a sign the United States is a terrible place” and argued that BLM is “in effect a political party.”

“Should the State Department be promoting a political party at U.S. embassies in foreign countries? I can’t think of a precedent for that,” Tucker said.

He then threw to guest National Review writer (and Fox News contributor) Deroy Murdoch, who shared the same views. Both Tucker and Murdoch laughed about what it might look like if right-wing groups like QAnon or the National Rifle Association flew flags at American foreign embassies. “Fly the QAnon army flag,” Tucker joked.

Murdoch then laid out a truly chilling vision for the future: “Imagine if in 2025 if Donald J. Trump is reelected president with (Vice) President Ron DeSantis,” Murdoch said. “Imagine a few U.S. embassies overseas, are flying flags of the National Rifle Association, or the national right to life committee.”

Murdoch continued by arguing that those groups — which advocate for guns and further restricting nationwide access to reproductive healthcare — are more peaceful than BLM, which says it advocates for “combating and countering acts of violence, creating space for Black imagination and innovation, and centering Black joy.”

“I don’t equate those peaceful groups with Black Lives Matter, which has incredible recent violent history. But imagine what people on the left would respond if you had NRA flags flying over the US Embassy in Paris, the US Embassy in London, I don’t think (they’d) be very happy,” Murdoch mused.

A recent Washington Post study found that “for ‘liberal’ protests, Republicans were more likely than Democrats to perceive the protesters as violent,” while at conservative protests, both groups identified violence relatively equally.

Tucker also took time during tonight’s episode to criticize President Joe Biden’s plan to grant over 100,000 Haitians temporary protected status, a policy former president Trump had (unsuccessfully) worked to remove. Biden opted to extend amnesty protections to Haitians so they can remain living in the U.S. until they deem it’s safe to return to Haiti.

“Haiti, whatever its merits, has been poor and volatile for 200 years, so this is not a new development, that’s insane,” Tucker said. He added, “I mean, they’re trying to change the population of the United States” and argued that Democrats want to “import millions of new voters.”

That’s not true, but even if it were the Democrats’ plan, it wouldn’t work — only U.S. citizens over the age of 18 are eligible to vote in U.S. elections. Non-U.S. citizens and amnesty holders cannot.

To those who are familiar with Tucker and Fox News’ rhetoric, this might sound reminiscent of the time Tucker argued that Democrats were in favor of “replacement theory,” which led to the Anti-Defamation League calling for his removal. At the time, Fox boss Lachlan Murdoch backed Tucker up. And of course as always it’s important to remember that in 2020 Fox News argued in court, and a judge agreed, that Tucker is not a credible source of news or information.

Check out both clips in the video at the top of the page.