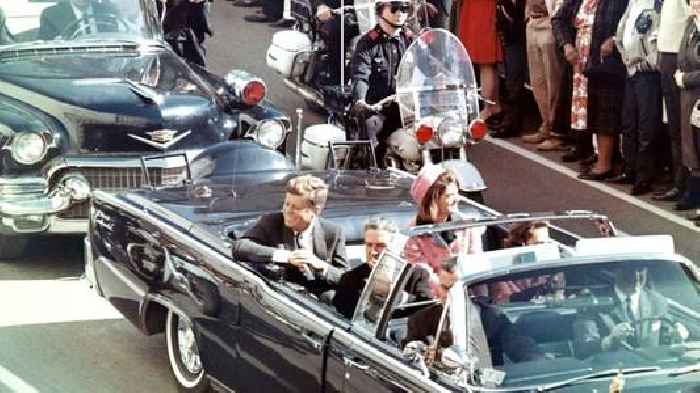 “There is a four-hour version if you want to dig deeper,” said Oliver Stone when introducing his documentary “JFK Revisited: Through the Looking Glass” in the Cannes Premiere section on Monday afternoon.

Those words were reminiscent of that dull best man’s speech gag about if you haven’t struck oil after ten minutes, stop boring. Because even after this two-hour version of talking heads, photostats of redacted files and some shocking shots of President Kennedy’s brain, we are no closer to anything like the truth.

Stone’s film is not a companion piece, making-of or follow-up to his all-star 1991 drama “JFK” (a director’s cut of which played in the Cinema de la Plage section on the beach the night before) but a procession of white, male authors and experts in boring shirts hectoring you with their theories and old books. Tarantino cinematographer Robert Richardson is credited with the photography, although he’s in the most somber and sober of moods, with Stone himself asking occasional questions in dull reverses that seem clearly to be done in a different room and another day. Never mind who shot JFK – who really shot this documentary?

The only real film-making élan comes in the opening montage, which expertly and even thrillingly recreates the days around of the November 1963 assassination, starting with Kennedy’s “peace in our time” speech, Walter Cronkite delivering the official time of death and the numb chaos that ensued. “Now let’s go back and piece together what really happened, and why,” says Stone in the voice-over.

He has access to newly declassified documents, he says, and new archives. “The conspiracy theories have been shown to be conspiracy facts,” he says. And there is no doubt that there are huge inconsistencies in almost every testimony, and Stone goes through them forensically. You’d have to be a JFK devotee to know what exactly is new and what isn’t, but the pile of detail is fascinating to the point of being overwhelming.

Lee Harvey Oswald’s rifle isn’t the one they found in the Texas Book Depository. He can’t possibly have made it down the steps. Gerald Ford on the Warren Commission moved a bullet hole. It was an exit wound; no, it was an entrance wound. Who really took the photos of the autopsy? Why did the CIA let Oswald move from New Orleans to Dallas? What really happened in the attempted plots during motorcades in Chicago and Tampa and who were prospective “patsies” Vallee and Lopez?

Of course, Oswald can’t have acted alone. At least, that’s what I’ve always thought. But now, I’m not so sure, which surely can’t have been the intention of the documentary. I’m simply not convinced anyone is smart enough, thorough enough, organized enough to be pulling quite so many strings and not making any mistakes. Or if they are, I think I’ve even ended up admiring their ingenuity.

While the film is feigning to be fascinating and revelatory, the questions amass until they being to feel like a flurry of jabs without landing the knockout blow. Every gun becomes a smoking one, until there’s so much smoke you can’t see anything clearly. Stone loses the thread.

First Whoopi Goldberg (why?) is narrating, then Donald Sutherland (OK, he was Mr X in the 1991 movie) takes over. You want some clarity and you get is Robert McNamara in the fog, Castro in Cuba, withdrawal from Vietnam, De Gaulle in Algeria, Nasser in Egypt, Lumumba in the Congo … The CIA are in everything and Kennedy has no dominion there.

Stone is clearly of the opinion that the world would be a better place if Kennedy had lived, and that’s why there are so many statues of him around the world. Yet Stone reckons that his plans for world peace, as outlined in that opening speech, did not suit certain persons. But who are these persons? There is no mention of the mafia here, so often cited in Kennedy lore, and while there are some bravura takedowns of Warren Commission staple theories such as “the magic bullet” that allegedly zipped through Kennedy and Governor Connally in the seat in front, who really ever believed that in the first place?

Although the film acts all macho like it’s a brave and thorough documentary with all the answers, the shots of Stone himself striding around downtown Dallas and turning to glare at the camera are nigh-on comical. There’s little that’s inventive about the film, visually or politically; it’s the sort of thing we’ve become used to in all those true-crime reconstructions, and some passages even come across as frothing at the mouth babble.

Trust nobody, believe nothing. If the Kennedy assassination is still the ultimate conspiracy theory, why doesn’t Stone look at how that fervor has become part of modern life in the age of social media and Trump? Are they connected somehow, these shadowy worlds of data and Russia and racists and crackpot theorists?

I think Stone believes Kennedy’s plan to withdraw from Vietnam was at the heart of the plot to assassinate him, but he is curiously, frustratingly circumspect about actually saying it. And still can’t find out who ordered it, although the number of times he flashes up the photo of the “seven wise and eminent Americans” smiling around their Warren Commission table and the constant recourse to clips of pipe smoker and CIA chief Allen Dulles gives you a hint. But after all this time, all this research, all this hype, you want and deserve more than a hint.

In normal times it should be fairly easy to separate the content of a certain piece from the circumstances of its creation, but we..