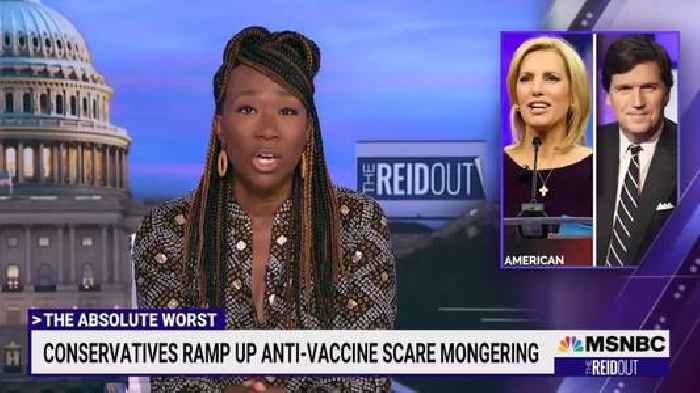 Joy Reid is fed up with Republican politicians and pundits she calls a “death cult” for spreading misinformation about the safety of COVID-19 vaccines.

In her daily Absolute Worst segment of MSNBC’s “The ReidOut,” Reid went all in on Newsmax primetime host Rob Schmitt and Fox News anchors Laura Ingraham and Tucker Carlson, who she nicknamed “Tuckums” awhile back.

“Well, it’s no surprise since the right-wing talking heads Tuckums and Laura Ingraham over at Fox are trying to get their viewers killed by smearing the vaccine,” Reid said.

“A Fox News cast-off over at Newsmax casually spouted some eugenics while knocking vaccines,” Reid said, before throwing to a clip where Schmitt said vaccines were “against nature.”

Schmitt also said certain people were just supposed to die from diseases — he said maybe “something’s supposed to wipe out a certain amount of people and that’s just kind of the way evolution goes.”

His comments prompted Newsmax to issue a statement aimed to distance itself from him. “From time to time, a guest or host may not be as supportive of these efforts. However, they do not reflect the position of Newsmax,” the spokesperson told the Washington Post Tuesday.

Reid continued to blast politicians on the right for not doing enough to encourage their constituents to get vaccinated as experts warn that the spreading Delta variant of the coronavirus could be more deadly for people who haven’t been immunized. Some states are actually taking vaccine hesitancy to the next level and trying to make unvaccinated people a protected class that can’t be “discriminated against” if they’re not refused entry to certain places or services for not having their shots.

She also noted that Tennessee recently fired its top official leading vaccination efforts, Dr. Michelle Fiscus — who claims she was let go because she sent a memo to officials recommending teenagers ages 14-18 be allowed to get the vaccine with or without parental approval.

Up next in the verbal firing line for Reid was her old favorite, Florida Gov. Ron DeSantis, who’s currently being sued by Norwegian Cruise Lines for his ban on so-called vaccine passports that would provide proof that a person has a coronavirus vaccine. Perhaps as a direct consequence of DeSantis’ actions throughout the pandemic, Florida continues to see high rates of positive COVID-19 cases and is in the middle of another uptick.

“Meanwhile, Florida Republican Gov. Ron DeSantis, who infamously banned businesses from requiring proof of vaccination is branding his opposition to COVID restrictions, selling anti-Fauci merch from his campaign website as Florida sees some of the highest rates of new cases in the country,” Reid said. “That is why the Republican death cult’s vaccine disinformation and war on public health is yet again, tonight’s Absolute Worst.”