‘Gossip Girl’ Reboot: Here’s Every Reference Made to the Original – So Far 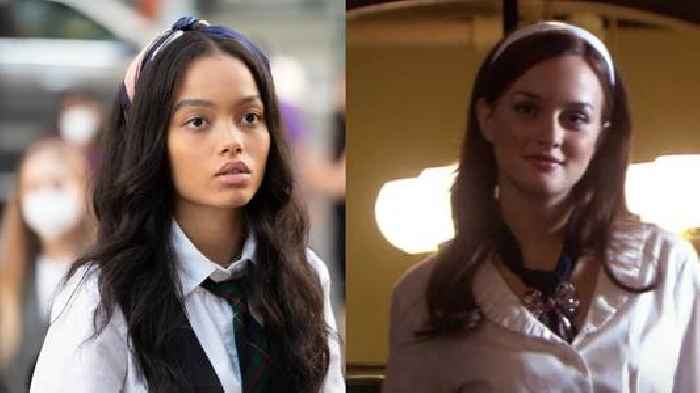 ‘Gossip Girl’ Reboot: Here’s Every Reference Made to the Original – So Far

Hey, Upper East Siders. “Gossip Girl” is back, and though the HBO Max reboot is clearly making it a point to show how this world has changed since the original CW series, there are certainly some distinct similarities. In fact, the reboot has already made some direct nods to its predecessor.

Like in the original “Gossip Girl,” they attend Constance Billard/St. Jude’s (it’s one, co-ed school now), the prep school where the original series was set. But the connections to the original go far deeper than that. Below, see a running list of every OG “Gossip Girl” Easter egg (even the deep cuts) in the first season of the HBO Max reboot.

While fans of the original CW series won’t see any major character cameos in the HBO Max version just yet, the first episode made sure to tie the two series together with some pretty heavy name-dropping. Nate Archibald (Chace Crawford) is referenced within the first 10 minutes.

“This school produced great people! Caroline Kennedy, Coulson Whitehead, Nate Archibald! It’s why I wanted to teach here,” Kate (Tavi Gevinson) exclaims as she and her coworkers lament their status at the school.

In the same breath that Nate is mentioned, Dan Humphrey (Penn Badgely) is, too — because obviously you can’t recreate Gossip Girl without acknowledging the original person. Apparently, Dan is still a novelist, and a well-known one at that.

Kate is shocked when her colleague Rebecca tells her that such a big name was the OG GG (which, if we’re being honest, doesn’t make total sense, because wasn’t Dan’s first book just… a fancier version of Gossip Girl? At least Kate’s coworker acknowledges that he thinks he remembers reading about it).

But speaking of Rebecca…

Look, even the most devoted “Gossip Girl” fan couldn’t be faulted for not knowing this one. Rebecca is a deep-cut cameo — from a character who never actually appeared on screen.

In the reboot, Rebecca is a teacher at Constance/St. Jude who inspires her coworkers to become the new team Gossip Girl. (Yes, GG is a group of teachers now; we’re rolling with it). The irony is, apparently Rebecca is no stranger to being a Gossip Girl suspect. As she explains to her coworkers, “She kept us all accountable. People thought it was me, but it was actually one of my classmates, Dan Humphrey.”

Her full name is Rebecca Sherman, and in the Season 2 finale of the original series, she’s mentioned as Blair, Chuck, Nate and Serena try to decipher GG’s true identity during a graduation party.

Here’s the scene itself:

Again, we never actually see Rebecca on screen; only her profile picture. Even “Gossip Girl” creator Joshua Safran didn’t expect fans to remember her. But she was there!

As the teachers continue to do their research on the old Gossip Girl, they quickly discover the tumultuous relationship between Chuck Bass (Ed Westwick) and Blair Waldorf (Leighton Meester). As Kate so bluntly puts it: “This Chuck and Blair thing is out of control.” Well, yes, that’s putting it mildly.

This moment is also used to remind us that Blair was, at one time, the Princess of Monaco, and that Dan had a piece he wrote published in The New Yorker (though he isn’t mentioned by name in this reference).

There’s also a moment later in the premiere where the teachers use a specific GG post for reference: “Spotted. Chuck Bass losing something no one knew he had to begin with: his heart.” That post comes in the 10th episode of Season 1, after Chuck spots Nate and Blair hooking up. Like we said, “out of control” is a gentle way of describing Chuck and Blair’s love story.

*The Steps of The Met*

Even though we knew it was going to happen thanks to the trailer, there was still something nostalgic about seeing Julien and her friends sitting on the steps of The Met for lunch. Countless wars were waged, friendships were formed and yogurt was spilled on those steps in the original “Gossip Girl,” and clearly not much has changed.

In the original “Gossip Girl,” Blair Waldorf was queen bee, and in place of a crown, she had her iconic headband. In the HBO Max premiere, that headband gets its own shoutout — in the most brutal way.

When Julien attempts to stealthily help her half-sister Zoya be welcomed into her friend group, it goes about as well as you’d expect. Zoya’s an outsider and a freshman, and as Monet so disgustedly points out, “She has a headband on.” Technically it’s a scarf, but come on, Monet. Put some respect on the headband.

Surprisingly, Serena Van Der Woodsen, typically the main focus of the original Gossip Girl, doesn’t get name-checked a whole lot in the premiere. She’s listed as an archetype, as the teachers realize they need to target the popular kids — “the Serenas, Blairs, Nates and Chucks — make them think there’s another Dan Humphrey in their midst” — with their new account.

But then we touch on the friendship between Blair and Serena. Like Blair and Chuck, that friendship was complicated at the best of times. And it becomes the launchpad of the new Gossip Girl.

“Gossip Girl would’ve been nothing without Blair versus Serena. Their rivalry launched her,” Kate says. With that, they decide to focus on Julien and Zoya, positioning them to be the new dueling queen bees.

“Who knew what Blair and Serena’s friendship was actually like? Gossip Girl’s perception was reality,” Kate notes.

Realizing they’ve been targeted, Julien later admits that “it’s kind of a badge of honor” that she and Zoya are in GG’s crosshairs. But having done her research, she knows how to beat Gossip Girl — or at least, she thinks she does.

“All we have to do is take a page from the Blair and Serena playbook and beat Gossip Girl at her own game,” Julien confidently says.

Now, there are countless moments that spring to mind here, as Blair and Serena often tricked more than just Gossip Girl into thinking there was drama afoot. And it’s a nice reminder that as crazy as they could get, “they do besties better than anyone.”

Name-dropping Alec Baldwin may not seem like a callback to the OG series at first, because in fairness, he was never in it. But his brother was. William Baldwin played William van der Woodsen, Serena’s father, for the original series’ run.

“Last time, Alec Baldwin confiscated my phone. I never got it back,” Teacher Jordan says. Clearly, Alec Baldwin has a similar scary reputation as William van der Woodsen. It’s a subtle, but cute nod to someone who caused a lot of trouble in the original “Gossip Girl.”

It was always a habit of the original “Gossip Girl” to refer to characters by the first letter of their name. Blair became B, Serena became S, and so on and so forth. The new “Gossip Girl” has done that here and there, but in the second episode, it went one further.

As Julien tried to break up Zoya and Obie, she decided to work with Gossip Girl herself. “I’ll uncancel her on one condition: she brings me the juiciest dirt on Little Z,” Julien says. And no one can forget that, in the original, Jenny Humphrey wasn’t just J; she was “Little J.”

Episode 3 brought yet another reference to the Humphrey family, after dubbing Zoya “Little Z” in episode 2. Like the HUmphreys, Zoya is meant to be an outsider in “Gossip Girl,” and that’s only thrown into sharp relief when she starts officially dating Obie.

Naturally, GG pounces on that in her post, and finishes by saying “Hope the prince doesn’t lose interest, or Little Z may find herself Lonely Z.”

In the original “Gossip Girl,” Constance was run by Headmistress Queller, and in a blink-and-you’ll-miss-it moment, she gets her due in the HBO Max reboot. It comes when Vivian Burton (Donna Murphy), the new principal of the school, calls an all-staff meeting to address the growing GG problem.

You only hear it in the background, but she does mention that “my predecessor had warned me of a pernicious presence that would sabotage students’ studies, their social lives, even hijack graduation.”

Of course, hijacking graduation in itself is a reference back to the season two finale, where Rebecca Sherman from above was first mentioned. Watch the moment here:

When a little boy showed up next to Zoya on the steps of the Met introducing himself as Milo, diehard fans of the OG “Gossip Girl” probably audibly gasped. But for those who didn’t catch it right away, here’s what’s up with him.

Milo is the son of Georgina Sparks (Michelle Trachtenberg), who was Gossip Girl herself at one point, and one hell of an adversary for Serena, Blair and the crew. Georgina convinced Dan Humphrey that Milo was his son, even getting him to sign the birth certificate. (In reality, Milo is the son of a man named Serge Ivanov). In season 4, Georgina briefly left town without telling anyone, leaving Dan to care for MIlo.

Now, he’s all grown up, and apparently causing mischief with the skills of his mother. In a weird way, we’re almost proud to see it.

Though Georgina herself doesn’t show up in episode 4, we do get glimpses of her. When Milo takes Zoya to his home to dig up dirt for her latest vendetta against Julien, we see a wall of photos, each one showing Georgina with someone prominent.

At this point in the world of “Gossip Girl,” Georgina has apparently made friends with people like Vladmir Putin, Kim Jong Un, Elon Musk, Ed Sheeran and more — which really probably shouldn’t surprise us.

Of course, at the center of all those photos is one big one of Blair Waldorf. It’s unclear if Georgina is still out for blood, considering the ways Blair bested her time and again, or if she simply worships her for her power. Our guess is the former, but you really never know.

Hopefully we’ll get both Blair and Georgina in person this season, so we can find out what’s up. Last we saw, Georgina and Jack Bass had hit it off, so maybe they’re some odd form of sisters-in-law.

Episode 5 of HBO Max’s “Gossip Girl” launches Thursday, August 5. We will update this list with more references as they come!

On this episode of Actually Me, Evan Mock, Thomas Doherty, and Eli Brown of 'Gossip Girl' go undercover on the Internet and respond..

The new 'Gossip Girl' is too cold to be cool

This new "Gossip Girl"Â is really just a heightened reality version of the world we all find ourselves trapped in, with a twist.