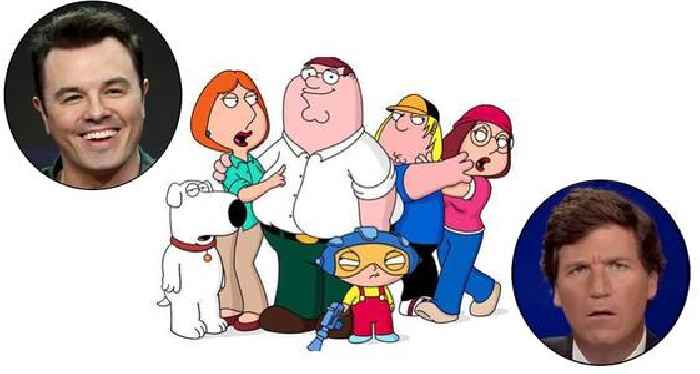 “Family Guy” creator Seth MacFarlane said that he’s getting so fed up with Fox News’ star host, Tucker Carlson, that he’s toying with moving his animated adult comedy show to another network.

After broadcasting “Family Guy” on Fox for 19 seasons, MacFarlane said that Carlson’s antics on Fox News has him rethinking Fox Broadcasting Company as the home for “Family Guy” and his other animated sitcom, “American Dad!” where it has been since its 2005 launch. Although it’s not the same division as Fox News, it is under the same corporate umbrella.

“Tucker Carlson’s latest opinion piece once again makes me wish Family Guy was on any other network. Look, Fox, we both know this marriage isn’t working anymore,” MacFarlane joked in an Aug. 1 tweet. “The sex is only once a year, I don’t get along with your mother, and well… I’ve been having an affair with NBC.”

The mastermind behind over 360 episodes of the Griffin family’s antics referenced “Carlson’s latest opinion piece” in his tweet. While it’s unclear exactly which segment he’s referring to, there have been plenty of moments on “Tucker Carlson Tonight” recently that could have rubbed MacFarlane the wrong way — like Carlson repeatedly suggesting that Dr. Anthony Fauci created the pandemic, likening vaccines to “sterilization” or lobbying for teachers to wear body cams to ensure they don’t teach critical race theory.

Truth be told, we don’t know the minutiae of MacFarlane’s and the show’s contract with the network; the show might be locked in to a spot there for a while longer depending on broadcast agreements. All that said, a Fox Entertainment spokesperson confirmed that, as of now, the network has no plans to change its carriage of “Family Guy.”

Reruns of the show’s first 15 seasons are also syndicated on Adult Swim, TBS and FX. Hulu is the only company with streaming rights for Seasons 1-19 of “Family Guy.”

The actor likened his relationship with the network to a failed marriage.

Family Guy creator Seth MacFarlane has said he wishes the show was on "any other network" than Fox, in a row over Fox News host..