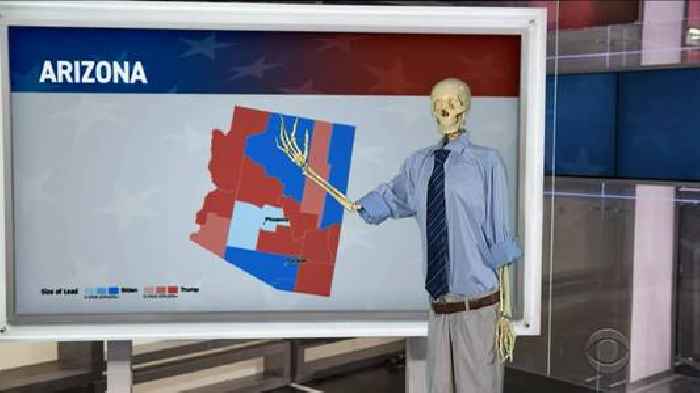 On Monday’s “The Late Show,” Stephen Colbert kicked off his monologue by mocking Arizona’s audit of the 2020 election by Trump supporters. And during the bit, he discovered he accidentally killed MSNBC’s Steve Kornacki waiting for the results.

Colbert made light of the costly recount of the Arizona tally — which found no evidence of widespread voter fraud and found in fact confirmed that Joe Biden received more votes in the state than originally thought, and Trump received less votes. Whoopsie.

“Which brings us to a breaking news alert,” Colbert said after recapping that. This was followed by a “breaking news” bumper parodying normal election night coverage, after which Colbert said “‘The Late Show’ is ready to project that Joe Biden has won Arizona, and therefore, Joseph Robinette Biden is still president of the United States.”

Continuing the election night themed gag, Colbert continued, “We go now live to election headquarters to our Number Cruncher, Steve Kornacki, still standing by since last November. Steve, what do you have for us?”

But when Colbert cut over, all we saw was a skeleton standing in front of a white board.

“Dammit,” Colbert said when the camera cut back to him. “I told you. I forgot to feed him. Should have got him one of those cat fountains!”

Kornacki, of course, developed something of a fandom last year for his manic presence during MSNBC’s election coverage. Alas, he never provided data analysis for Colbert during that whole thing. So of course, he’s still very much alive.

Colbert went on to revel in the “crushing humiliation” Republicans experienced in the audit, particularly the way the vote totals changed. “He really did get tired of winning,” Colbert said about Trump. He also told some more jokes at the ex-president’s expense, like when he talked about the footage of Joe Biden getting his vaccine booster, joking “that’s the biggest prick I’ve seen in the White House since last January.”

Then, Colbert indulged in a fake conspiracy theory about that boosters shots photo arm, mocked the dangerous lunatics who keep defying measures to prevent the spread of COVID and how poorly Republican-led states are doing when it comes to COVID, and then mocked disinformation about COVID spread by right wing media figures.

You can watch the whole monologue above.

Can We Please Get Steve Kornacki on the Oscars Show?