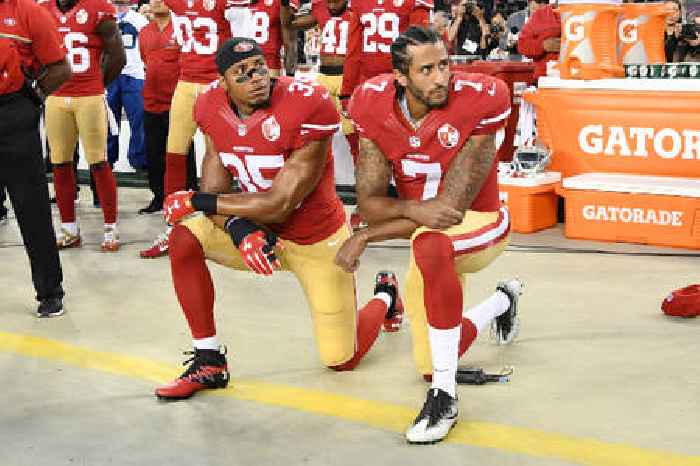 The National Football League is now encouraging its players to “speak out and peacefully protest,” while admitting “we were wrong for not listening to NFL players earlier.”

“We, the NFL, condemn racism and the systematic oppression of Black People,” NFL commissioner Roger Goodell said Friday in a video posted to the NFL’s Twitter account. “We, the NFL, admit we were wrong for not listening to NFL players earlier and encourage all to speak out and peacefully protest.”

Goodell’s comments did not specifically mention the player protests of silently taking a knee during the national anthem that was started by Colin Kaepernick during the 2016 season, nor did Kapernick’s name come up at all. Kaepernick has not been signed since that 2016 season.

We, the NFL, condemn racism and the systematic oppression of Black People. We, the NFL, admit we were wrong for not listening to NFL players earlier and encourage all to speak out and peacefully protest. We, the NFL, believe Black Lives Matter. #InspireChange pic.twitter.com/ENWQP8A0sv

Goodell’s statement came two days after New Orleans Saints’ quarterback Drew Brees said he would “never agree with anybody disrespecting the flag of the United States of America or our country” by kneeling, even given the nationwide protests against police brutality over the last two weeks. Brees was harshly criticized for missing the point of Kaepernick’s protest, which he has said numerous times had nothing to do with protesting the American flag or the military. Brees has since apologized multiple times.

Since Brees’ comments, multiple NFL players pressured the league to take a bolder stance on injustice, with several making a video trying to force Goodell say something.

“A message on behalf of the nfl” pic.twitter.com/iilDpnZfyV

The NFL released an earlier statement over the weekend as the protests against police brutality and racial injustice intensified over the weekend. It was criticized as tone-deaf considering Kaepernick’s continued unemployment.

Earlier on Friday, President Donald Trump argued, as he did in 2017, against players’ first amendment rights to protest during the national anthem, stating in all caps: “NO KNEELING.”

HBO’s ‘Hard Knocks’ to Feature Both LA Rams and Chargers

HBO’s NFL docuseries for the first time will feature two teams, and they share the same city: The Los Angeles Rams and..

Colin Kaepernick Joins Medium’s Board of Directors, Will Write About Racism and Civil Rights