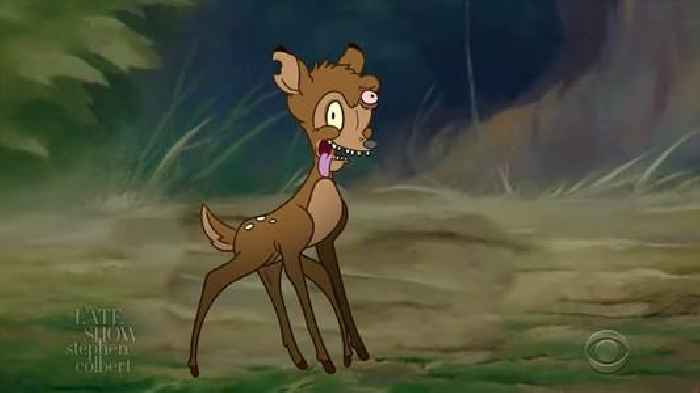 On “The Late Show” Thursday night, Stephen Colbert poked fun at recent news out of Texas that state Republicans want to legalize the cloning of deer, by imagining that a sequel to the Disney classic “Bambi” would be like if he were a clone. (Spoiler: It would be extremely bloody.)

In case that makes no sense, earlier this week a Texas Republican proposed a law that, in the unlikely event it passed, would authorize game animal breeders to use cloning in order to produce larger animals. Which… ok.

Wildlife officials note that cloning, because it basically repeats the same DNA,, would introduce potentially dangerous biological uncertainties into the ecosystem, such as the risk that rare vulnerabilities could become more widespread and endanger populations of animals. And that was basically the hook Colbert used for joke.

The clip, an animated trailer for a fake movie called “Bambi Returns: The Clone Wars,” featured “Ren & Stimpy” style animation juxtaposed with repurposed clips from the original “Bambi.” In it, we see that Bambi is now a horrifying, disfigured clone who is also filled with murderous bloodlust.

“This movie will have your whole family laughing… and, asking ‘why has god forsaken us?'” the trailer jokes. And it ends with the promise that coming soon is “The Lion King 2: Zombie Mufasa.” Watch the whole clip above.

As if you needed the encouragement