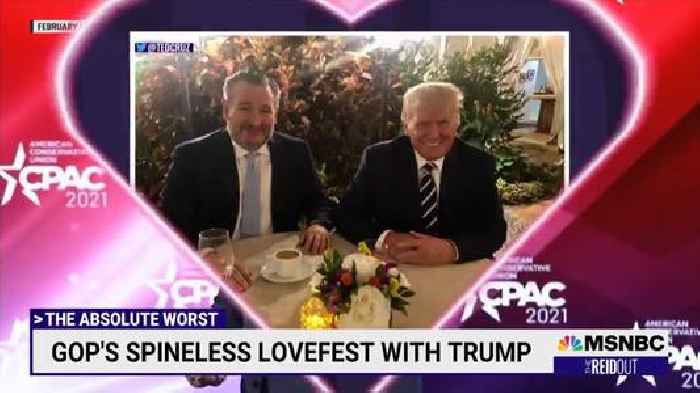 “It’s the arms of the angel music for me,” MSNBC host jokes

Joy Reid took a minute during “The ReidOut” Wednesday night to laugh a bit about what she called the “spineless” love Republicans politicians have for Donald Trump. That love was conveyed through a short series of clips taking a look back at how so many of them fully changed from fierce Trump critics to fanatical Trump supporters during the 2016 election.

The segment started off with some clips of Republicans in 2016 — Ted Cruz and Lindsey Graham in particular — saying mean things about Trump and how much of a disaster and terrible person they thought he was. Then, the scene switched to Reid.

“Ew. Remember the 2016 primary, when Florida man’s Republican opponents at least pretended they had principles? Well, that obviously changed once he got elected. But now, even though he’s out of office and puttering around Mar-a-Lago grabbing every available mic and not even pretending to support the right-wing cancellation of Diet coke, there’s a beautiful lovefest,” Reid said.

And then she rolled the clip, a supercut of Trump’s biggest boosters from the last few months, particularly Cruz and Graham, saying very, very nice things about him. It’s all pretty cringey regardless, but the whole thing is paired with some sweeping romantic music, which really reinforces the whole cringe vibe.

“It’s the arms of the angels music for me,” Reid joked after the clip ended. Watch the whole thing below right now.

"It's the arms of the angel music for me." @joyannreid calls the GOP's spineless lovefest with Trump tonight's absolute worst. #TheReidOut pic.twitter.com/uGO2NqnOQ9