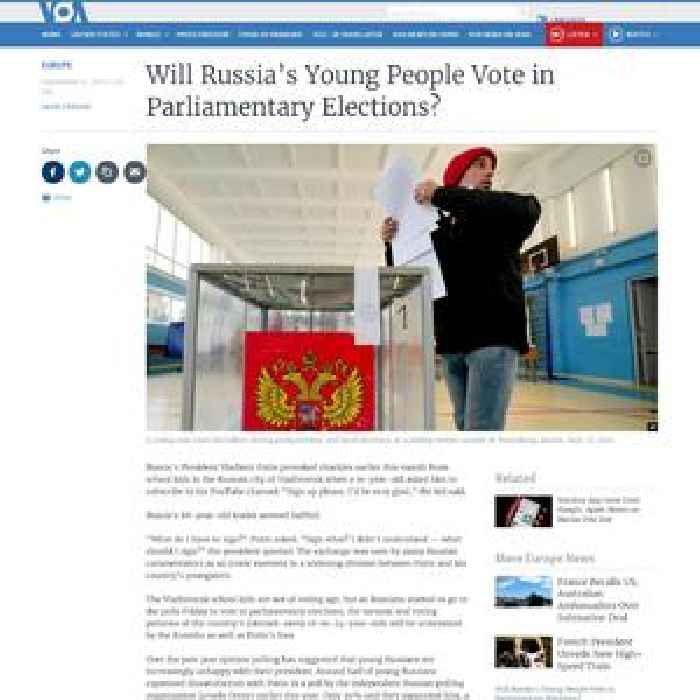 Russia’s President Vladimir Putin provoked chuckles earlier this month from school kids in the Russian city of Vladivostok when a 10-year-old asked him to subscribe to his YouTube channel. “Sign up please. I’d be very glad,” the kid said.   Russia’s 68-year-old leader seemed baffled.     “What do I have to sign?” Putin asked. “Sign what? I didn’t understand — what should I sign?” the president queried. The exchange was seen by many Russian commentators as an iconic moment in a widening division between Putin and his country’s youngsters.   The Vladivostok school kids are not of voting age, but as Russians started to go to the polls Friday to vote in parliamentary elections, the turnout and voting patterns of the country’s internet-savvy 18-to-24-year-olds will be scrutinized by the Kremlin as well as Putin’s foes.   Over the past year opinion polling has suggested that young Russians are increasingly unhappy with their president. Around half of young Russians expressed dissatisfaction with Putin in a poll by the independent Russian polling organization Levada Center earlier this year. Only 20% said they supported him, a sharp drop from 36% previously. Nearly half said the country was moving in the wrong direction under his leadership, with just 44% saying the direction of travel was okay.   “Young people are becoming more politically active,” analyst Natia Seskuria said in a recent commentary for London-based think tank Chatham House. “After 21 years of Putin’s rule, regime fatigue is settling in — particularly in the younger generations who have known no other leader.”   “Growing dissatisfaction made many join demonstrations that led to more than 10,000 arrests and dozens of criminal cases against the protesters,” Seskuria said, referring to protests mounted in the wake of the imprisonment of Kremlin critic Alexei Navalny earlier this year on charges he says are trumped up. “Young Russians have used social media to mobilize support for rallies and to criticize Putin. Navalny, too, has used the power of social media to connect with younger voters.” How many of Russia’s young people vote for Putin’s ruling United Russia Party will give some idea of the challenge the Kremlin may face in the coming months. It also will indicate whether Russia’s leader will face a mounting backlash from a young generation that is frustrated with economic stagnation, the lack of job prospects and a propaganda-heavy media machine that does not connect with it in the way Navalny has managed to with You-Tube videos and social media posts.     Polling data suggests that just 26% of Russians are ready to vote for Putin’s United Russia Party, which is seeking to maintain its Duma majority of 334 seats. That is its lowest opinion poll rating since 2008.     But few doubt United Russia will retain its Duma majority. Kremlin critics say this election — voting takes place over three days — is the least free since Putin came to power 21 years ago. Genuinely independent candidates are barred from running, cash-handouts have been offered to voters, and there is evidence of voter intimidation, all taking place amid an unprecedented crackdown on dissent.     Critics also expect plenty of ballot-rigging in the election for the 450-seat State Duma. Long lines formed at some polling stations Friday, according to local reports. Navalny supporters suggested state workers were being mobilized to vote by the Kremlin and local authorities.     “Every time [under Putin], elections have looked a little less like elections. Now this process is complete,” exiled Putin critic Mikhail Khodorkovsky told Echo of Moscow radio station this week. “The next time our people will vote for real will be after they earn that right on the barricades,” he added.   But little is being left to chance by the Kremlin, say Navalny supporters.   And they accused U.S. tech giants Google and Apple Friday of bowing to Kremlin pressure by deleting a youth-oriented Smart Voting app that offers a step-by-step guide on how to vote tactically against pro-Putin candidates.     “This is an act of political censorship, and it can’t be justified,” said Kira Yarmysh, Navalny’s press spokesperson.   “They caved into the Kremlin’s blackmail,” added Leonid Volkov, Navalny’s former campaign manager.   Kremlin spokesman Dmitry Peskov rejected the allegation of political censorship, telling reporters in Moscow the app was removed in observation of the “letter and spirit” of Russian law.   From prison, via a message on Instagram, Navalny urged voters to undermine the Kremlin by voting for the best placed candidate not affiliated with United Russia, which means in many places voting for candidates offered by the Communist Party. In the message Navalny said: “Are you not interested in trying?”   The removal of Navalny’s tactical voting app by Apple and Google from their app stores also drew criticism from international rights organizations.   “Russian government officials are putting tech companies in a tightening vise, threatening criminal actions against individual employees inside the country to pressure their employers into yielding to calls for censorship,” said Matt Bailey, director of the digital freedom program of PEN America.     “The decision on the part of Apple and Google to remove an app from the iOS and Android App Stores being used to organize protest against the government is the result of blackmail, pure and simple,” he added in a statement.

Results from Russia’s parliamentary and local elections Sunday have given a boost to the allies of President Vladimir Putin, who..