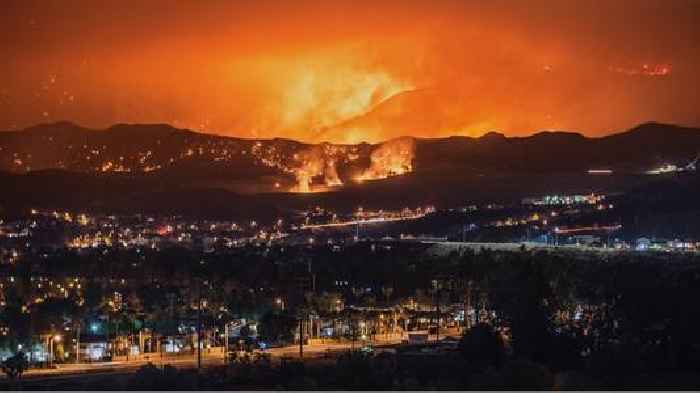 It rather famously only takes a few minutes for Pixar’s animated classic “Up” to reduce audiences to tears, a record which could be broken by Lucy Walker’s brutal new documentary “Bring Your Own Brigade.” After a brief introduction to a survivor of a horrifying California wildfire, the film cuts to similar apocalyptic blazes all over the world, and in particular the image of a helpless koala bear on fire, crying out in pain, until it’s saved by human hands.

Walker’s documentary sometimes spares us the gruesome details and terrifying life-or-death despair of wildfire victims. But “Bring Your Own Brigade” also spends much of its first act immersed in the inferno of California’s Camp Fire of 2018, with cell-phone footage of citizens unable to escape gridlock as their cars begin to overheat in the surrounding flames. Panic is in the air, everyone seems to be about to die, and 911 calls fill the soundscape with desperate voices burning alive in their own homes.

It’s an upsetting and shocking way to begin any film — and it may be too much for some viewers — but Walker is in complete control. The terrors of the Camp Fire and Malibu Fires, which roared concurrently in the deadliest day for wildfires in California history (so far), aren’t abstract concepts. They’re not statistics. They’re human tragedies, and “Bring Your Own Brigade” is more than willing to force you into these nightmare scenarios, burning down the audience’s emotional defenses to convey the gravitas and immediacy of these ongoing, escalating disasters.

Nobody can claim that Walker, who previously directed the unflinching Oscar-nominated shorts “Waste Land” and “The Tsunami and the Cherry Blossom,” doesn’t have a strategy. In a voice-over, she promises that this is a story with hope in it, but after an opening salvo of apocalyptic annihilation, it’s hard to believe that’s where “Brigade” is headed. It may be so overwhelming that we want to shut down our senses altogether in an attempt to defend our minds from existential panic.

After the fires die down, “Brigade” starts asking difficult questions about why these disasters are increasingly powerful, deadly, and dangerous. And while global climate change is certainly a factor, the film spends more time analyzing the insidious and short-sighted decisions that escalate the danger: European immigrants to America who emphasized fighting all fires instead of allowing controlled burns, and lumber companies that plant so many young trees so close together that fires spread further and further and faster and faster.

And while it may seem hopeful to know that we can reduce the severity and danger of wildfires, since we’re the ones who made them worse in the first place, that sense of hope Walker promised seems elusive once the human element kicks in. The same communities that endured unspeakable loss refuse, only a short time later, to vote for regulations that would protect their homes. Even the simple, inexpensive solution of keeping flammable gardens a minimum of five feet from houses becomes a locus for local controversy, as citizens fight to keep their communities “quirky” at the cost of personal safety.

Walker, a British filmmaker who moved to California and openly discusses her outsider’s perspective, describes this tendency as distinctly American. Her choice of expression — “self-immolation under the mantra of personal freedom” — echoes loudly long after the credits roll.

“Bring Your Own Brigade,” named after an incident where Kim Kardashian saved her own house from the blaze by hiring a private firefighting team, is a film about burning ourselves down. It’s a film about hubris, selfishness, failed bureaucracies, and a stubborn inability to learn from past mistakes. One can’t help but wonder if, perhaps, the horrors of the fire should have been saved for the final act of the film, to remind us harshly all that what we value today will seem worthless tomorrow, when all that really matters is survival at all costs. Because we are certainly trapped in a cycle, and only breaking that cycle will do a lick of good.

Walker’s film may struggle to find the hope it promises, but it never loses the sight of the individual stories playing out amidst the disasters: Families suffering from enormous loss, people opening their homes to the newly homeless, harrowing tales of personal sacrifice, and sad stories about firefighters sifting through ashes in search of the bones of personal friends. The plight of incarcerated Americans forced to fight fires as a modern slave labor force is mentioned, but frustratingly unexplored, possibly for lack of time, or possibly to stay focused on the root cause of these disasters.

Nobody makes a movie like this unless they care about humanity. It’s too easy to turn away, run away, and make a film about puppies that save Christmas instead. It takes a lot of love to produce a film as confrontational about our failings as“Bring Your Own Brigade.” It takes a lot of love to show us the horrors we inflict upon ourselves in an effort to jumpstart our capacity for empathy and our need to make changes that positively effect our future. But it’s a tough love, stained by disappointment, and it can be very painful to accept.

“Bring Your Own Brigade” opens in US theaters August 6 and on Paramount+ and CBSN August 20.

Watch a Truckload of Fireworks Prematurely Go Off During Transport (Video)

This review of “Ema” was first published after the film’s premiere at the 2019 Venice Film Festival.