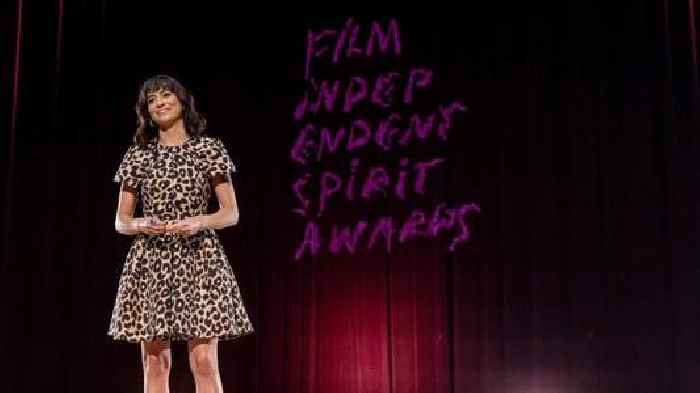 Back in the early days of the Film Independent Spirit Awards, the operative cliché about the show’s relationship with the Academy Awards was “win on Saturday, lose on Sunday,” because the indie films that won Spirit Awards typically came up short at the Oscars.

Spirit Award organizers made sure that the first part of that phrase wouldn’t apply this year, because they moved the show to Thursday night from its usual spot on Saturday afternoon.

And then voters did their best to make sure that the second half of the phrase wouldn’t apply, either, voting almost across the board for the nominees that seem likeliest to also win on Sunday, when the Oscars take place.

Sure, Riz Ahmed winning Best Male Lead for “Sound of Metal” over Chadwick Boseman for “Ma Rainey’s Black Bottom” was a mild surprise, though Ahmed has a shot at doing the same thing at the Oscars on Sunday.

Otherwise, though, from Best Feature winner “Nomadland” to director Chloe Zhao, actresses Carey Mulligan and Yuh-Jung Youn and the screenplay to “Promising Young Woman,” the Spirit Awards felt like a warmup for the Oscars, not an alternative to them.

(And yes, Mulligan’s victory for “Promising Young Woman” over Viola Davis for “Ma Rainey’s Black Bottom” and Frances McDormand for “Nomadland” is far from a sure thing at the fiercely competitive Oscar Best Actress race, but she’s a formidable contender there.)

Twelve of the 14 film categories contained at least one Oscar nominee – and in every one of those categories, an Oscar nominee won. “Nomadland” went into the show as the clear favorite for both the Spirits and the Oscars, and it came out as exactly the same thing.

*Also Read:*
From Chadwick Boseman to Chloe Zhao – 19 People Who Could Make History on Oscar Night

That’s not surprising: In recent years the Spirit Awards have often veered close to the Oscars, including a four-year streak in which the same films won the top prize at both ceremonies: “12 Years a Slave,” “Birdman,” “Spotlight” and “Moonlight.”

But a show that struggles to display an identity of its own is a tough sell this year in particular, when we’ve seen one group after another grappling with the idea of giving out awards without being able to gather people together. In that environment, Film Independent became the latest awards body to put on an awkward show that honored good work but seemed a little pointless in the process.

Granted, it was nice to see “Sound of Metal” stars Ahmed and Paul Raci receive awards, and to have the potent Bosnian film “Quo Vadis, Aida?” win in an international-film category where it wasn’t going to head-to-head against the likely Oscar winner, “Another Round.”

But the virtual show, which was hosted by “Saturday Night Live” cast member Melissa Villasenor, couldn’t really capture the spirit of the usual tent on the beach, and the winners weren’t distinctive enough to make up for comedy bits that sometimes seemed endless. The show did manage to get everything wrapped up in two hours, though to do so it had to dispense with five awards in rapid succession with little fanfare at the 90-minute mark. (Sorry, winners in the cinematography, editing, international, John Cassavetes Award and non-scripted TV categories.)

The five new television awards might have given a boost to kickoff the Emmy campaign for Michaela Cole’s “I Will Destroy You,” which won two awards, though it’ll take a while to get used to the Spirit Awards wading into the TV waters.

Then again, this is a year in which the Spirit Awards and every other show probably deserves the benefit of the doubt. Pandemic awards are a strange and unsatisfying beast, so it’s best to look at this as a show that managed to tread water while we all wait for better times.